Data suggests that an individual has a much greater chance of being hit by lightning over a 12-month period than they do of catching Covid-19 during a commercial flight, according to IATA.

The airlines body claims during a briefing today that since the start of 2020 there have been 44 cases of Covid-19 reported in which transmission is thought to have occurred during a flight. It notes that over the same period, some 1.2 billion passengers have travelled.

The briefing follows the release of several studies in September that suggested an airliner cabin was a potential source of significant coronavirus outbreaks.

“The risk of a passenger contracting Covid-19 while on board appears very low,” states said David Powell, IATA’s medical adviser. “With only 44 identified potential cases of flight-related transmission among 1.2 billion travellers, that’s one case for every 27 million travellers.

“We recognise that this may be an underestimate, but even if 90% of the cases were unreported, it would be one case for every 2.7 million travellers. We think these figures are extremely reassuring.”

Powell recalls hearing data that suggests the chances of an individual being struck by lightning in a 12-month period is between one in 500,000 and one in 1.2 million. 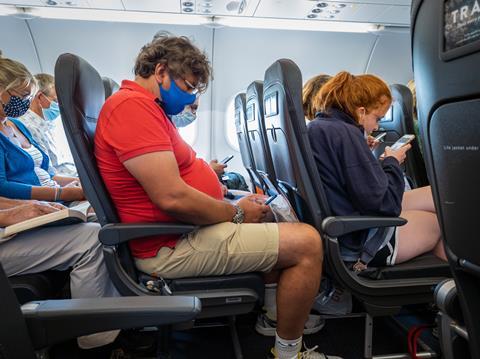 Those figures are in line with those stated by the UK’s Royal Society for the Prevention of Accidents, for example, which puts the odds of being struck by lightning at around 1 in 1 million over a 12-month period.

Furthermore, “the vast majority of published cases [of coronavirus cases on board an aircraft] occurred before the wearing of face coverings in flight became widespread”, Powell observes.

IATA acknowledges that although “there is no way to establish an exact tally of possible flight-associated cases”, its data aligns “with the low numbers reported in a recently published peer-reviewed study by Freedman and Wilder-Smith in the Journal of Travel Medicine”.

During the same briefing, Airbus, Boeing and Embraer presented separate computational fluid dynamics (CFD) research showing that aircraft airflow systems can control the movement of particles in the cabin, limiting the spread of viruses.

“After multiple, highly-detailed simulations using the most accurate scientific methods available, we have concrete data which reveals the aircraft cabin offers a much safer environment than indoor public spaces,” says Bruno Fargeon of Airbus Engineering, who leads the airframer’s Keep Trust in Air Travel initiative.

“The way that air circulates, is filtered and replaced on airplanes creates an absolutely unique environment in which you have just as much protection being seated side-by-side as you would standing six feet apart on the ground.”

Indeed, the industry body and the airframers highlight several factors that they claim make air travel relatively Covid-safe, including: limited face-to-face interactions as passengers face forward; the seat-back acting as a physical barrier to air movement; the minimisation of forward-aft flow of air, with a segmented flow design which is directed generally downward from ceiling to floor; the high rate of fresh air coming into the cabin; and the use of HEPA filters which have “more than 99.9% bacteria/virus removal efficiency rate”.

“The addition of mask-wearing amid pandemic concerns adds a further and significant extra layer of protection, which makes being seated in close proximity in an aircraft cabin safer than most other indoor environments,” IATA adds.

Studies published elsewhere in recent weeks have concluded, however, that commercial airliners are potential sources of coronavirus outbreaks.

One recent study in the Emerging Infectious Diseases journal stated, for example: ”We conclude that the risk for onboard transmission of SARS-CoV-2 during long flights is real and has the potential to cause Covid-19 clusters of substantial size, even in business class-like settings with spacious seating arrangements well beyond the established distance used to define close contact on airplanes.

“As long as Covid-19 presents a global pandemic threat in the absence of a good point-of-care test, better onboard infection prevention measures and arrival screening procedures are needed to make flying safe.”