Emirates Airline will bounce back strongly from the Covid-19 crisis without any fundamental changes to its business model, according to the operator’s president Tim Clark, with its mix of widebody aircraft enabling it to take advantage of likely supply-side shortages in the coming years.

Expressing optimism about the industry’s eventual recovery from the pandemic – while acknowledging that the hoped-for resumption of long-haul services is not likely to gain any momentum until the final quarter of this year – Clark states during a CAPA Live event today that the Covid-19 crisis is “not so transformational that it’s caused us to change what we’re doing or we plan to do”.

Rather, given Emirates’ determination to keep its existing fleet in an “advanced state of readiness”, Clark believes it is well placed to take advantage of a shortage on the supply side of medium- and long-haul sectors in the coming years, as the demand side recovers more strongly than many industry observers expect.

“My instinct is telling me that this will come good, and it will come back at a pace, so be prepared,” he states.

Amid dozens of widebody aircraft being mothballed and retired by airlines around the world in recent months, and a guaranteed slowing in deliveries of such jets from Airbus and Boeing in the near term, ”people should be thinking about the upside, not the downside” of future traffic projections, Clark continues.

“Demand will drive to the upside, and that will cause you to think about capacity,” he says.

Clark therefore confidently predicts that Emirates’ A380s will be in its fleet plans through to the mid-2030s. 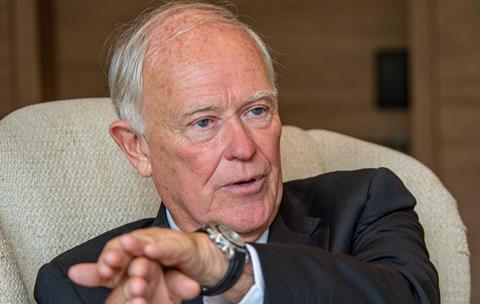 Clark’s instinct is that demand will return quickly

The 777X, which was initially due to enter Emirates’ fleet in June 2020, is now “unlikely… before the first quarter of 2024”, but will be a key part of the operator’s strategy on trunk routes.

Boeing announced a further delay to the 777-9 programme in late January, saying it intends to deliver the first of the type in late 2023.

With that delay in mind, Clark predicts a future where Emirates is back “using the A380s on the trunk routes, barrelling through from east to west and north to south… with the 777X gradually slipping in to replace the A380s that eventually go and retire”.

Furthermore, citing “cities and markets that we haven’t served”, he asks: “Do we probably need more aircraft post-pandemic to do the job?”

That expansion is baked-in to Emirates’ plans thanks to outstanding orders for the Boeing 787s and Airbus A350s that would operate on what are likely to be thinner routes. Clark says it is just a case of “looking at how we can bring these into the fleet and when”.

Eventually, Emirates will have a “leaner, very fuel efficient, environmentally friendly network that will probably be 30% larger in terms of cities served than it is today,” he says.