Qantas and Emirates plan to extend their joint venture arrangement for five more years to 2028.

A pact to renew their existing partnership, expiring in March 2023, was signed by Emirates president Tim Clarke and Qantas chief executive Alan Joyce at the IATA Annual General Meeting being held in Boston. 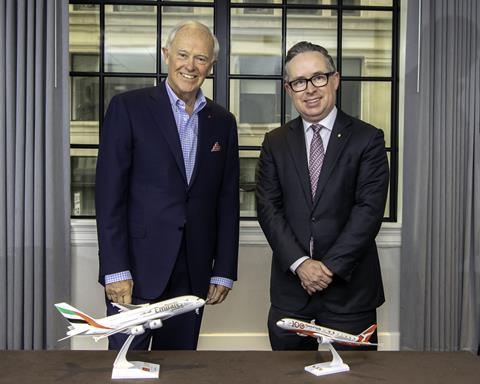 Tim Clark of Emirates and Alan Joyce of Qantas

The agreement has an option for the joint venture, originally formed in 2013, to be extended out to 2033.

The pair add that they will seek re-authorisation from regulators, including the Australian Competition and Consumer Commission. A renewal of the joint venture will allow them to continue coordinating in areas such as pricing, schedules, sales and marketing on approved routes until 2028.

The pact provides Emirates passengers access to over 55 Australian cities, while Qantas passengers can fly to 50 cities in Europe, the Middle East, and North Africa via Dubai.

“This marks the continuation of one of the most significant bilateral partnerships in aviation,” says Qantas chief executive Alan Joyce.

“We called it ‘seismic’ when it launched in 2013 and it has been, especially in terms of what it’s meant for over 13 million people who have travelled on flights that form part of the deal. The premise of our partnership with Emirates has always been that no airline can fly everywhere but combined we can fly to most of the places our joint customers want to travel to. And that we treat each other’s customers as our own.”

Clark was also upbeat on the joint venture: “The extension of our partnership with Qantas is testament to its success. It also reflects our commitment to ensure customers travelling to and from Australia, a market which we have served for 25 years, continue to have the best connections and frequent flyer benefits. Despite the challenges of the past 18 months, today’s announcement reinforces that Emirates is here for the long-haul.”