Australia’s Regional Express is to acquire at least three more jet aircraft by year-end, as the airline discloses “sterling” operational performance in July, the start of the new financial year.

The carrier will induct its seventh Boeing 737-800 by end-August and is in “advanced discussions” to lease another two more examples by year-end, says executive chairman Lim Kim Hai. 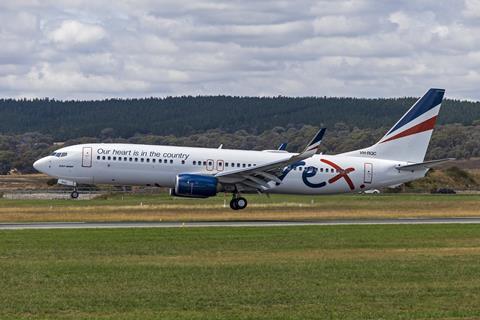 The fleet expansion comes amid expectations of continued growth in passenger numbers, and a return to full-year profitability in 2023.

For mainline domestic routes, Rex disclosed a pre-audited base passenger revenue of around A$13.6 million ($9.5 million) in July, which it says is about double that of the monthly average of the April-June quarter.

On its regional network, Rex says its revenue and passenger numbers in July were “almost identical” to pre-pandemic levels.

Lim notes the “phenomenal performance” is largely due to its tie up with travel agencies and corporate accounts.

“I have every expectation that our numbers will continue to grow sharply over the next few months since July has seen only 30% of the committed monthly passenger contributions from these tie-ups,” he adds.

Lim also notes that “barring further external shocks”, the airline will be profitable in the current financial year, which ends on 30 June 2023.

“This is quite a feat, considering that we only properly restarted domestic operations in February this year,” he says. Rex suspended mainline operations earlier this year amid the surge of infections caused by the Omicron variant of the coronavirus.

While the airline has yet to release financial results for the year to 30 June, it was in the red for its half-year results, amid a revenue decline brought about by waves of coronavirus infections.

In the statement, Lim also hints at future regional network expansion, including taking on arch-rival Qantas in routes the latter has a monopoly over.

He also did not hold back criticism of the national carrier, stating: “Our great performance in the regional markets also validates our decision to stand our ground against Qantas, which flooded the market on marginal regional routes in an attempt to destabilise us. Not only did their plan not succeed, but we are now having record passengers and revenues on our regional network by concentrating on the larger regional routes in direct competition with them.”

And in a thinly-veiled potshot at its rival, Lim cites Rex’s on-time performance and low cancellation records, which he notes is a “stark contrast to the total chaos and dysfunctionality of the other carriers with horror stories of planeloads of luggage being lost and passengers sleeping overnight on the floor at airports”.

Both carriers have a long history of bad blood, with tensions escalating in 2021 following Rex’s entry into mainline jet operations.