Australia’s Regional Express (Rex) has secured a permit from Australian authorities clearing it to commence Boeing 737-800 operations from March 2021.

The High Capacity Air Operator’s Certificate (HCAOC) was granted by the Civil Aviation Safety Authority (CASA), allowing the Rex to use 737-800s on its existing network, says the airline. 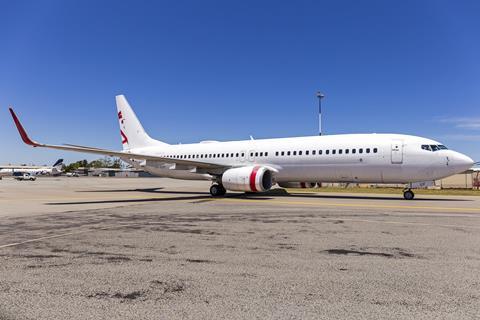 Rex’s first 737-800, VH-VUF, at Wagga Wagga airport in December. It has yet to be updated with a new livery

“CASA’s commitment and dedication to the recovery effort during this period of national emergency is nothing short of outstanding and exemplary,’ says chief executive Lim Kim Hai.

“Under the leadership of Shane Carmody and Craig Martin, CASA has gone above and beyond to ensure that the aviation industry is fully supported by the regulator in all aspects. CASA’s assistance was critical at a time when all airlines were fighting for survival.”

In November, the company secured A$150 million ($109 million) in funds from PAG Asia Capital to support its launch of narrowbody operations.

Rex plans to commence domestic services with six 737-800s in March 2021. Cirium fleets data indicates that it has received only one 737-800 bearing registration VH-VUF (MSN 34168). The aircraft is managed by Banc of America Leasing Ireland, and served with Virgin Australia from April 2005 to March 2020.

Prior to the coronavirus pandemic, it operated 60 Saab 340 turboprops to 59 destinations.