South African Airways has signed an interline agreement with regional operator CemAir as the state-owned flag carrier continues on a path towards privatisation and the divestment of low-cost unit Mango.

The interline agreement ”informs SAA’s continuing strategy to grow the carrier, responsibly, profitably and sustainably” following the resumption of operations in September, SAA said on 7 December.

CemAir, which is based in Johannesburg, mainly uses a fleet of Bombardier CRJs, plus Dash 8 and Beech 1900 turboprops on a domestic-focused network. 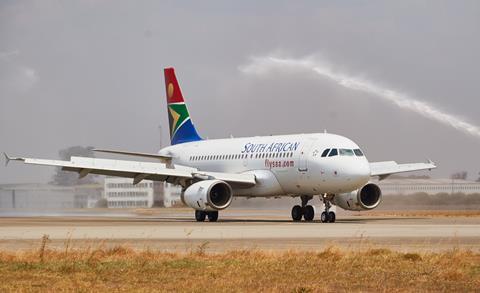 Days earlier, on 2 December, SAA announced that the business rescue plan for its grounded low-cost subsidiary Mango had been approved by creditors.

That milestone ”paves the way for Mango to find an equity partner”, SAA states, reiterating that it does not see a future for the unit within its restructured business.

“There are no reasonable prospects of Mango succeeding should it be operationalised prior to obtaining an investor or equity partner,” SAA said in mid-November. ”SAA’s position is that this process should be finalised as soon as possible.”

Reports suggest that the South African government expects to complete the sale of a 51% stake in SAA to the Takatso Consortium in early 2022.