Singapore Airlines Group narrowed its half-year losses on the back of a significant revenue uplift, as it anticipates a continued rise in travel demand in the near-term, with more countries easing border restrictions.

In financial results released for the six months to 30 September, the group – comprising mainline carrier SIA and low-cost unit Scoot – disclosed an operating loss of S$619 million ($457 million). This compares to the record S$1.86 billion operating loss it posted in the same period last year, when it was battered by the impact of the coronavirus pandemic. 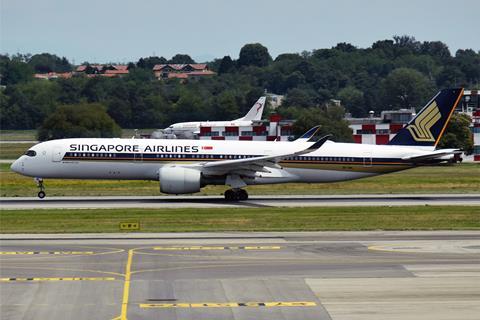 Against 2020’s lower base, group revenue rose 73% to S$2.8 billion, as carriers ramped up operations in tandem with border openings.

Traffic for the period grew about five-fold year on year, with capacity witnessing similar growth, says the group.

Since their launch on 8 September, VTLs have been established with 14 countries, most of them in Europe and North America. SIA and Scoot jointly fly to 21 cities in these 14 countries under the VTL arrangement.

SIA Group also attributed the revenue increase to a strong showing from its cargo business, with capacity rising 50% year on year, and loads carried jumping nearly 62%.

Costs for the half-year dipped 1.5% to S$3.45 billion, mainly due to the absence of fuel hedging ineffectiveness costs. However, increased flying activity this year – coupled with rising fuel prices – meant net fuel costs more than doubled year on year.

SIA Group posted a net loss of S$837 million, a significant improvement compared to the S$3.5 billion net loss last year. It notes that this was due to better operating performance, as well as the absence of hefty impairment costs.

On a quarterly basis, SIA Group widened its losses, as a revenue increase failed to outpace a rise in costs. The group was S$345 million in the red at the operating level for the quarter to 30 September, compared to the S$274 million operating loss it posted in 2020.

Revenue rose 18.3% year on year to S$1.53 billion, while expenses increased nearly 20% to S$1.88 billion. The company says this was mainly due to higher fuel prices, coupled with higher fuel volumes uplifted.

The volatility in fuel prices remains an area of concern for SIA Group, which notes that prices have been “trending higher” in recent months, amid a resurgence in demand and a global energy crunch.

In its outlook, SIA was optimistic about the Singapore government’s recent plans to reopen borders, particularly to key Asia-Pacific markets, such as Malaysia and Australia.

“The group remains ready to capitalise on revenue and growth opportunities as they arise, and will adjust its capacity accordingly, while ensuring operational resilience and cost discipline,” it states.

On the cargo front, SIA says strong demand is expected to continue into the year-end, traditionally a cargo peak period.

“The SIA Group will continue to maximise freighter utilisation to meet demand. Expansion of bellyhold capacity will continue with the resumption of passenger flights, and the continued deployment of passenger aircraft for cargo-only flights as required,” says the company.