South Korean low-cost carriers remained in the red during the second quarter, though losses narrowed on the back of revenue uptick.

For the quarter ended 30 June, Korean Air sister carrier Jin Air reported an operating loss of W49 billion ($41.7 million), narrowing the W60 billion loss it made during the same period in 2020. 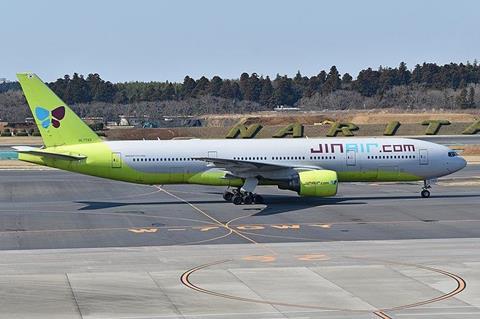 Jin Air also narrowed its net loss — at W50.4 billion in the current quarter, compared to W59 billion in 2020.

The low-cost carrier more than doubled revenue, to W63.4 billion, outpacing a 36% increase in costs to W112 billion.

Domestic services accounted for 88% of revenue, as border restrictions were still in effect. Cargo revenue for the quarter shrank: while it made up 6% of the airline’s revenue in the second quarter of 2020, it only made up 0.3% in the current period.

Revenue for the quarter increased more than two-fold to W56.8 billion, as the airline increased flying activity.

Meanwhile, Jeju Air reported an operating loss of W70.8 billion for the three-month period. Comparatively, the airline was W84.3 billion in the red for the second quarter of 2020.

Jeju more than doubled revenue for the period to nearly W75 billion, while costs rose 28% to W124 billion.