The Dallas-based low-cost carrier says in a regulatory filing on 16 December it now expects daily cash burn during the quarter to be “approximately $12 million”. That’s up from a previously estimated $10-11 million. It also says that it “remains cautious given the uncertainty of near-term revenue trends”. 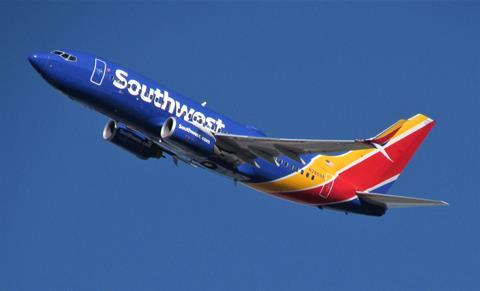 The recalibration comes two weeks after the airline warned 6,828 employees or 12% of its workforce that their jobs may be at risk. If carried out as planned, this would be the first large-scale involuntary furlough scheme in the company’s history.

In addition, the airline, which operates an all-Boeing 737 fleet, says in the filing that it expects to have its first re-certificated 737 Max aircraft in revenue service by March 2021, slightly earlier than the previous estimate of April 2021.

Southwest is one of the world’s top Max operators. During the type’s 20-month grounding it had 34 of the aircraft stored in Victorville, California and another 233 on order with Boeing, according to Cirium fleets data.

”The company recently reached an agreement with The Boeing Company…to take delivery of the delayed Max aircraft and currently expects to receive 35 Max 8 deliveries, including 16 leased aircraft, through the end of 2021,” the airline says. ”Taking into account planned retirements of its 737-700 aircraft, the company does not intend to grow its fleet in 2021, compared with its fleet of 747 aircraft as of December 31, 2019.”

In order to kick-start demand, Southwest has announced numerous new destinations and routes in the past weeks, looking to profit from potential leisure travellers’ desire for more direct point-to-point connections. On 16 December, Southwest says it is bringing two more destinations in California into its schedule next year.

From the second quarter of 2021, the airline will add Santa Barbara and Fresno, both in the central part of the state, to its network, bringing the total number of Southwest’s California destinations to 13. The company did not say where the flights will originate from.

“Our arrival in the heart of California, both on the Central Coast and in the Central Valley, will round out nearly four decades of investment in our California customers and communities,” Southwest’s chief commercial officer Andrew Watterson says.