The figure is an improvement on the $273.3 million pre-tax loss the low-cost carrier made in the second quarter of last year, and on the $244 million it lost in the first quarter of this year. 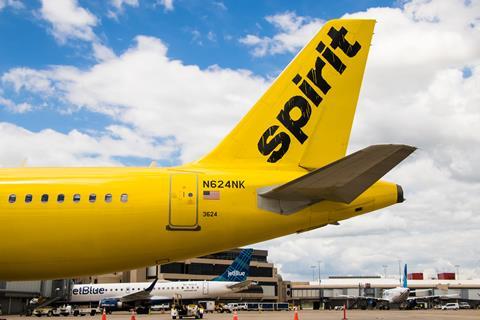 Spirit, which hopes to seal a merger with JetBlue in 2024 after approving an acquisition offer from the carrier at the end of July, posted a net loss of $52.4 million on an unadjusted basis.

Christie also highlights an improved operational performance across the quarter after “a rough start” to the period.

“We implemented key operational changes and quickly saw meaningful improvements in our operational reliability and recoverability,” he says. “We finished the quarter on a strong note with a 98.8% completion factor for June.”

Spirit chief financial officer Scott Haralson says that for the third quarter the carrier “continues to face constraints” that limit its ability to optimise its network and operate its full fleet.

”One of the primary limiters is the continued constraint on US continental flights to/from Florida,” he says. “Therefore, while demand trends continue to be strong as we head into the off-peak shoulder season, we are estimating pre-tax margins will be between negative one percent to positive one percent for the third quarter 2022.”