Thai Airways International intends to put 10 Boeing 747-400s up for sale as part of its rehabilitation plan and has issued a request for proposals (RFP) to assess interest from buyers.

The for-sale aircraft range in vintage from 1993 to 2003 and have total flight hours of between 67,027 and 115,026, a tender document dated 24 February shows. The aircraft are all located at Bangkok Suvarnabhumi International airport. 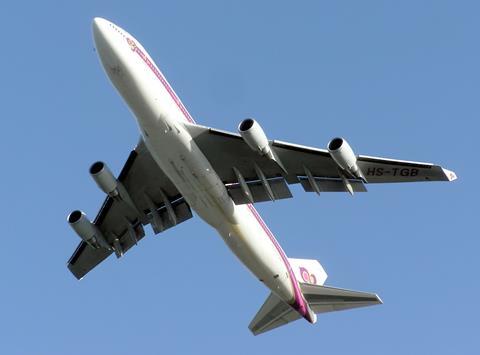 “Currently, Thai is in the process of preparing its rehabilitation plan and, subject to the court order approving the rehabilitation plan, Thai shall officially invite bidders to submit official proposals in respect of the used passenger aircraft,” the carrier’s executive vice president, technical department, Cherdphan Chotikhun states in the RFP.

Those interested in submitting an indicative proposal must submit this “as soon as possible” and before 10 March at 17:00 Bangkok time.