Transat AT, parent company of Air Transat, reported adjusted net income of C$5.7 million ($4.3 million) for its third quarter of fiscal year 2019, an upward swing from an adjusted net loss of C$5.0 million in the same period in 2018.

But the company reported a C$11 million net loss when accounting for “unusual” items, including C$13.7 million in expenses related to a pending acquisition of Transat by Air Canada.

The mixed results come as the airline continues a broad fleet renewal that includes acquisition of new Airbus aircraft.

The Montreal-based tourism operator also says Air Canada’s planned acquisition of all issued and outstanding voting shares of Transat is on track to close by the second quarter 2020. 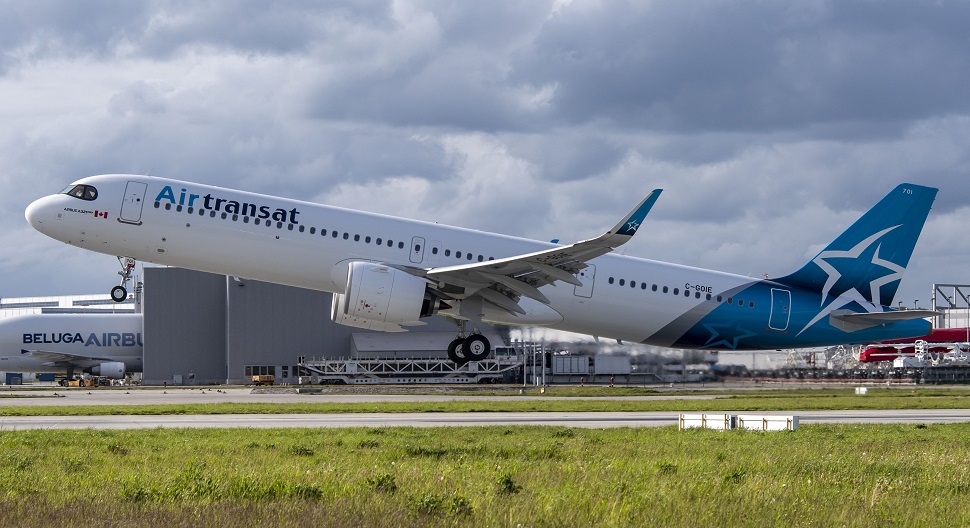 Air Transat already operates two A321LRs, including this aircraft, and plans to acquire 15 of the type by 2022

Air Transat, which took delivery of its first two A321LRs during the quarter as part of its fleet renewal programme, will increase that number to “three to four” in the winter, and to six by next summer, chief operating officer Annick Guerard adds.

Looking forward, Eustache says Transat’s fiscal fourth quarter 2019 results will be “slightly higher” than last year. Transatlantic demand, which accounts for a substantial portion of business in the summer season, is currently down 0.9% compared with last year, but selling prices are 2.1% higher.

“The impact of currency variations, combined with lower fuel costs in US dollars, will not result in a significant increase in operating costs if aircraft fuel prices remain stable and the [Canadian] dollar remains at its current level against the US dollar, the euro and the pound,” the company adds.

On the “sun destinations” market outbound from Canada, for which summer is low season, 83% of capacity is sold and the load factors are 5.6% higher compared with 2018, with unit margins also slightly above those in 2018.

The winter season’s primary market, sun destination capacity is 9% higher than on the same date last year, Eustache says, adding it is too soon to draw conclusions about the winter results.

“Increased load factor and pricing are encouraging,” he says.

To date, 27% of sun destination capacity has been sold and load factors are 1.8% higher compared with 2019. Here again, the impact of lower fuel costs, combined with fluctuations of the Canadian dollar, will not result in a significant increase in operating costs if aircraft fuel prices remain stable and the dollar remains stable against the US dollar.

The company also says Air Canada’s planned acquisition, announced on 27 June, is on track to close by the second quarter of 2020 given all regulatory approvals and closing conditions.

In August, a 95% majority of Transat’s voting shareholders approved the agreement for Air Canada to buy the company for C$18 per share, which would make the cash transaction worth C$720 million.

“We are pleased with the massive support from the shareholders for our planned arrangement,” says Eustache.

Air Canada, that nation’s largest airline, has promised to maintain Transat employees and headquarters in Montreal. The carrier has said passengers would benefit from more destinations, connections and frequencies under the combination.

Air Transat, which specialises in vacation packages, would continue to operate flights under its own brand after the Air Canada deal closes. Transat offers vacation packages, hotel stays and air travel to 60 destinations in the Americas and Europe, which could give Air Canada a chance to counter tourism packages from competitors including Canada’s second-largest carrier WestJet.

In June, Montreal real estate developer Group Mach made a bid to acquire Transat, which was blocked by the Quebec Administrative Court of Financial Markets on grounds it was “abusive” and aimed at preventing the Air Canada takeover.

Air Canada’s proposed acquisition comes at a time when Transat seeks to return to profit through 2022 by investing in new aircraft and land for accommodations.

Earlier this year, Air Transat took delivery of the first two of 15 Airbus A321LRs as part of its fleet renewal programme to replace older aircraft including six A310s. The A321LRs will be deployed on its longer international flights to Europe and the Caribbean, along with Central and South America.