The Kelowna-based carrier has released a video showing time-lapse painting a Boeing 737-800 with a design that includes a green-black-white fuselage and green engine cowlings. That aircraft will enter service in March, says Flair in a 13 February media release.

The design replaces a previous paint scheme that included a white fuselage with blue and purple-red accents, and blue engine cowlings. 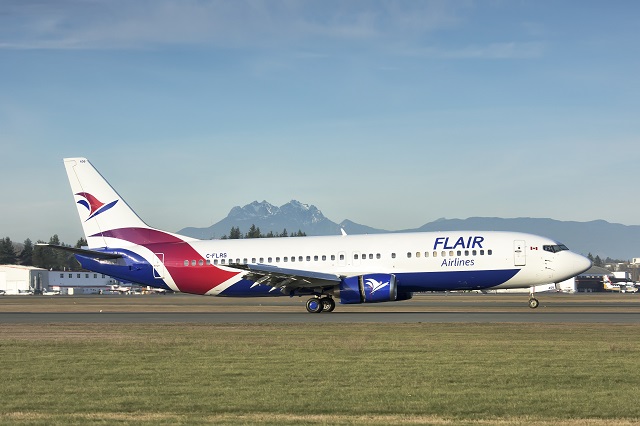 A Flair Airlines' Boeing 737 in the company's previous paint scheme.

The company has updated its website with the new brand and is outfitting aircraft crew with new uniforms, it says.

Flair has long operated charter flights, but in 2016 began scheduled flights for and under the brand of NewLeaf Travel Company. In 2017, Flair acquired NewLeaf's assets and changed the schedule airline's name to Flair Airlines.

The carrier's launch came as several other companies likewise eyed opportunity to establish ultra-low-cost carriers (ULCCs) in Canada, a country dominated by Air Canada and WestJet. WestJet launched its ULCC subsidiary Swoop in 2017, and companies like Jetlines and Enerjet continue working to get ULCC operations airborne.

The airline flies to some 15 destinations, most in Canada, but recently launched flights from Canada to the US destinations of Las Vegas, Phoenix Mesa, Miami, Orlando, Palm Springs and St Petersburg-Clearwater.