Vietnam Airlines has opened bookings for Seoul-Hanoi, with the first flight scheduled to depart 25 September.

“This is the first official scheduled international commercial flight to Vietnam since the Covid-19 situation restabilised in Vietnam,” the airline said in a 23 September statement. 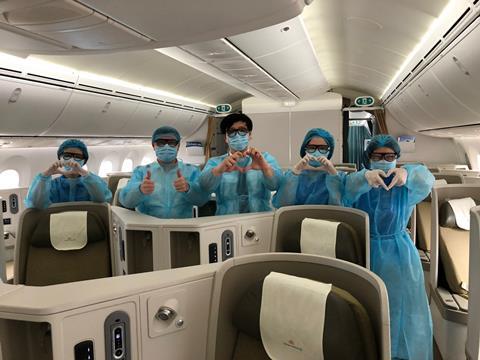 A Vietnam Airlines flight crew prior to operating a repatriation flight to Japan.

The airline is offering over 300 seats on an Airbus A350. Tickets are not sold through its website but instead through its offices and official agents in South Korea and Vietnam.

“Being the first scheduled international commercial flight to Vietnam, stringent coordination of Vietnam Airlines and the [relevant] authorities is required. As soon as the plan was approved on the night of September 22 by the government, Vietnam Airlines and related units completed all necessary procedures to resume this route and open bookings.”

Passengers are subject to various requirements, and this includes producing a valid result for a Covid-19 polymerase chain reaction test, taken within three days before departure; confirming their quarantine details in Vietnam; installing a tracking app on their mobile phone; and completing medical reports.

The airline adds: “Currently passengers connecting from a third country will not be accepted for transportation. After returning to Vietnam, crew members will be given health checks and quarantined as per regulations. The whole aircraft will be disinfected including the passenger compartment and cockpit in accordance with international standards.”

After suspending international flights from 23 March, Vietnam has resumed commercial passenger operations on six international routes to Tokyo, Japan; Seoul, South Korea; Guangzhou, China; Vientian, Laos; Taipei, Taiwan; and Phnom Penh, Cambodia. There will be no more than two flights per week for each destination.

In a 20 September update, the Civil Aviation Authority of Vietnam (CAAV) said that Vietnam Airlines and Vietjet Air will operate four weekly flights to Hanoi and five to Ho Chi Minh City collectively, capped at 1,304 and 1,290 seats, respectively.

CAAV also worked with partnering regulators for the schedules of foreign operators to Vietnam.

Japan Airlines and All Nippon Airways will alternately operate one weekly flight from Tokyo to Hanoi or Ho Chi Minh City.

Like Japan, Taiwan’s China Airlines and EVA Air will operate one weekly flight from Taipei to Hanoi or Ho Chi Minh City, and will submit specific operation plans to CAAV “in the near future”.

South Korea is also expected to submit details for its airlines soon.