Sweden expects to know by no later than the fourth quarter of 2014 whether the Swiss government will be able to move ahead with its planned acquisition of 22 Saab Gripen E fighters, with its timetable to be driven by a potential public referendum.

Opponents to the proposed deal have until January to secure the 50,000 signatures needed to call a referendum that would question the need to replace the Swiss air force’s Northrop F-5 interceptors. “We would expect a referendum in either May or September 2014” should they succeed, says Lt Col Klas Petersson, head of international relations for the Swedish air force’s Air Component Command.

“We are planning for a positive outcome, but fully respect their decision process,” Petersson told IQPC’s International Fighter conference in London on 14 November. “At the moment there is no ‘Plan B’,” he adds, noting: “we are inter-dependent on each other.”

Sweden’s parliament has approved its own national purchase of 60 new-generation Gripen Es, on the condition that the development is advanced in cooperation with an export customer.

Switzerland selected the developmental Gripen E to replace its aged F-5s following a competition with the Dassault Rafale and Eurofighter Typhoon, with Boeing’s F/A-18E/F Super Hornet also having previously been on offer. If approved, the purchase will lead to the introduction of a new fleet of the Swedish-built type from 2018, following the interim use of surplus Gripen C/Ds starting in 2016. 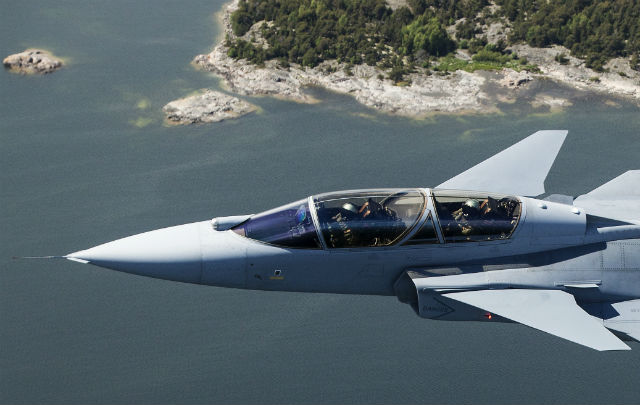 Saab is on schedule to fly its first of three Gripen E test aircraft during 2015, with current development activities being supported using an adapted B-model demonstrator (above). To enter use in 2018 in the MS21 operating standard, the new version boasts increased range and supercruise performance, plus the ability to carry a wider range and volume of air-launched weapons.