Swapping a top corporate job in the USA to take charge of a fast growing former start-up on another continent would be challenging at the best of times – but to do it the month aviation plunged into its sharpest ever downturn must be traumatic. 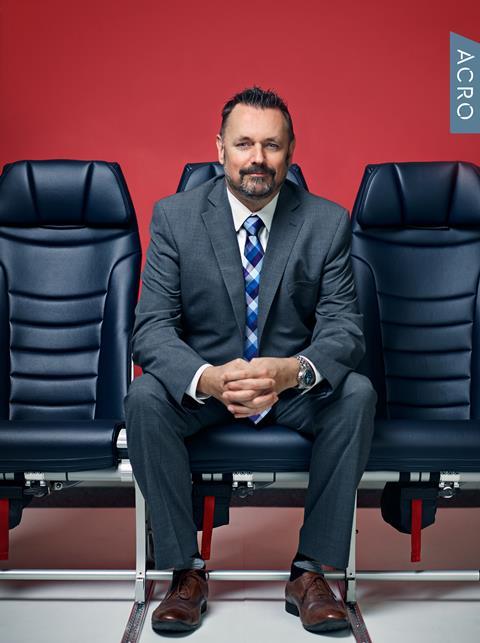 That was what confronted Neil Cairns when he moved from running the Collins Aerospace seating business in Winston Salem, North Carolina to become chief executive of London Gatwick-based Acro Aircraft Seating on 9 March.

The firm had been enjoying a rapid ascent since being founded by former Virgin Atlantic executive Chris Brady in 2007, establishing itself in the low-cost, economy segment with some major customer wins before being acquired for £55 million ($73 million) by Chinese automotive group ZTC in 2017.

However, as for all interiors suppliers, demand collapsed in the second quarter of this year. While one of Cairns’ first tasks was “realigning staff levels” as it became clear the crisis was not going to be short, the impact has not been quite as bad as feared. “Thankfully we have seen mostly order deferrals rather than outright cancellations,” he says.

Cairns believes most airlines are in “wait and see mode” – Acro’s keynote customers include Allegiant, Air New Zealand, Jet2 and Spirit Airlines. There have been pockets of recovery and optimism, but “second waves are hitting and everyone is considering mid-term plans and preserving cash”, he says.

Since March, Acro has cut by a quarter its monthly production of some 3,000 seats. Staff losses have been kept to production and operational roles. “We have protected our engineering resource to stay true to our DNA of creating space and comfort in a high-density configuration,” he says.

A Chinese factory, due to open in 2019, remains on hold, but Cairns plans to “give an update on progress” at the AIX trade show in Hamburg next April. Like many interiors manufacturers, Acro has also been researching Covid-safe technologies, such as anti-microbial treatments and dividing shields.

Acro has evolved from being entirely focused on the aftermarket for much of the previous decade to deriving almost half its business from factory-fit seats – particularly with Airbus – and A321XLR operators are high on Cairns’ target list. The company is adapting one of its designs specifically for the type, and will unveil it “soon”.

The A321XLR is a “long-haul product with a narrowbody requirement” that he expects to perform strongly in Asia. “We are creating a seat with a widebody cabin feel with the right balance between cost, comfort and looks,” he says. “It’s about maximising passenger comfort without losing density.”

Acro, he says, is “small enough and agile to be a real creative partner for an airline”. Although the company’s heritage is in the low-cost airline market, he sees “higher-end” seats and new product development generally as being key to the future.

Six months into the job, Cairns – who before shifting to the USA ran the B/E Aerospace (now Collins) seating factory in Kilkeel, Northern Ireland – remains upbeat. “There has been a lot of hesitancy in the industry,” he says. “But we continue to put our faith in new designs.”