The newest interior on the block almost certainly belongs to Norwegian regional carrier Widerøe and its Embraer 190-E2, the first of the re-engined variant to be handed over.

Delivered on 4 April, the twinjet will enter revenue service on 24 April, linking the Norwegian cities of Bergen and Tromsø.

Widerøe has configured the jet in a 114-passenger, single-class layout. The Z2 seats, from exclusive provider Zodiac Aerospace, use a 29in (73.6cm) pitch with 2° of recline.

Aware of the increasing requirement from passengers, the carrier has specified the E190-E2 already wired for Panasonic's high-speed in-flight internet service, which will be rolled out over the coming years. 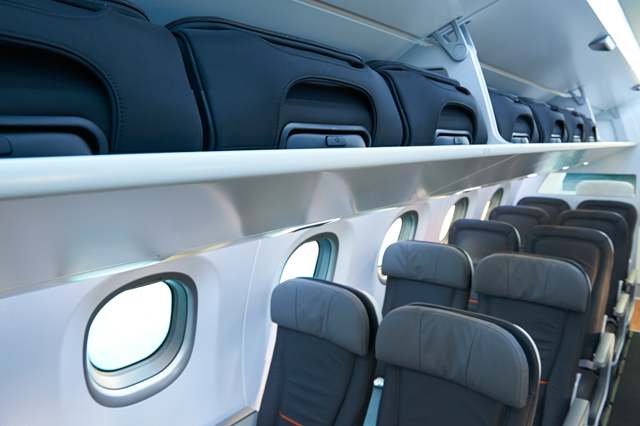 In addition, each seat is fitted with a high-voltage power outlet, rather than a USB port, with the airline wary of fast-changing device connection standards, he says.

And, given the relatively short sectors flown by the carrier, along with the increasing trend for passengers to bring their own devices on board, Widerøe has opted against any form of in-seat IFE system.

Although the E2 series retains the familiar two-by-two layout of previous-generation E-Jets, Embraer has brought a number of changes to the cabin in order to maximise passenger comfort, as well as "updating its look and feel", says programme manager Fernando Antonio Oliveira.

For example, it has increased by 3in the depth of the overhead bins in order to ensure that each passenger can fit in an IATA-standard case, wheels first.

The bins, manufactured by Embraer-Zodiac joint venture EZ-Air, feature "three or four patents" says Oliveira, such as a single-piece PSU. 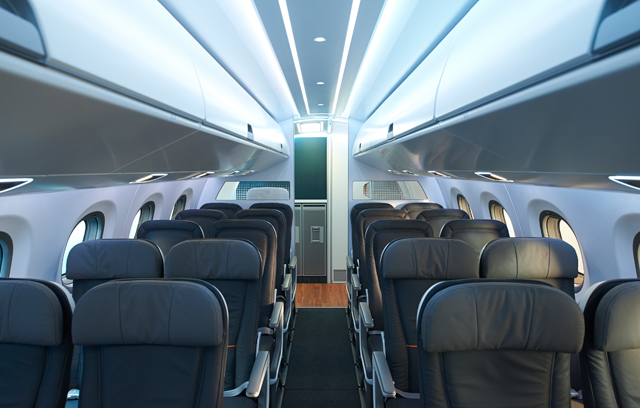 One of the criteria guiding the design of the cabin was to "not steal space from the passenger", he says.

For example, the box featuring the electronics for the in-seat power outlet sits on the underside of the seat itself, rather than at floor level.

Oliveira says that even though the E1's cabin had become a benchmark for the regional jet industry, it had to improve for the new-generation aircraft: "We need to maintain our leadership and leapfrog everybody."

Embraer is also developing a staggered business-class seat, which is currently in the critical design phase; service entry is expected in 2019 with an undisclosed customer.