Safran Cabin will close its Bellingham, Washington facility next year in response to the virus-driven aerospace industry slump.

“Due to a significant reduction of customer demand and revenue, Safran Cabin has announced the closure of Safran Cabin Bellingham… in 2021,” the company says. “Safran Cabin is committed to taking all reasonable measures, including career transition support, to ensure every employee in Bellingham is supported during this transition.” 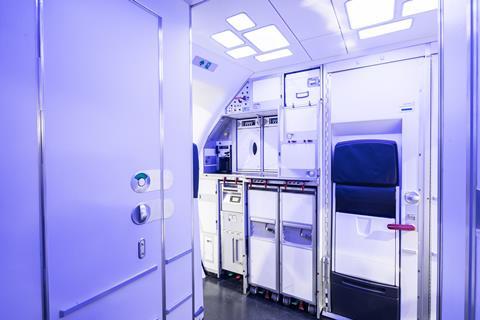 The French aerospace supplier has recently slashed its employment in Bellingham, which is about 90 miles (145km) north of Seattle. Safran now employs 250 staff at the site, down from 600 at the beginning of the year, it says.

“The sharp decline in global air travel as a result of the Covid-19 pandemic has a significant financial impact on the aviation industry,” Safran notes.

The company’s website describes the 22,800sq m (245,000sq ft) Bellingham facility as its “primary site for retrofit interiors”. The company has engineering, certification, production, repair and testing capabilities, and a flammability lab, in Bellingham.

The Bellingham site works on aircraft products including overhead storage compartments, ceiling panels, sidewalls and class dividers. The facility is a “tier one supplier” to the Mitsubishi Aircraft SpaceJet programme, says the company.

Safran Cabin has operations in 10 countries and more than 13,000 staff globally, it says.

Story corrected on 1 October to note the correct spelling of Safran Cabin.