Tata SIA Airlines has announced that its New Delhi based carrier will be called Vistara, with the carrier scheduled to start operations in October.

‘Vistara’ is derived from a Sanskrit word and implies ‘limitless expanse,’ says the Tata Group in a statement on its web site. Tata owns 51% of Tata SIA, while Singapore Airlines owns the remaining 49%.

The carrier will receive its first aircraft, an Airbus A320 in September, and will grow to 20 aircraft by 2019. 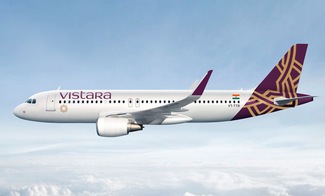 “Vistara will redefine the way we travel in India. I can confidently say that Tata's and SIA's legendary hospitality standards and service excellence will make Vistara a natural choice for passengers".

The branding work for Vistara was undertaken by Indian firm Brand Union Ray+Keshavan.

The lessor for the new carrier’s fleet is Singapore-based BOC Aviation.