The UK Royal Air Force has taken delivery of its latest example of the A400M tactical transport, with ZM403 being its third of an eventual 22 aircraft to enter service.

A flight crew from the RAF's 206(R) Sqn performed the A400M's 2.5h transfer from Airbus Defence & Space's final assembly in Seville, Spain to Brize Norton in Oxfordshire on 5 July, the service says. 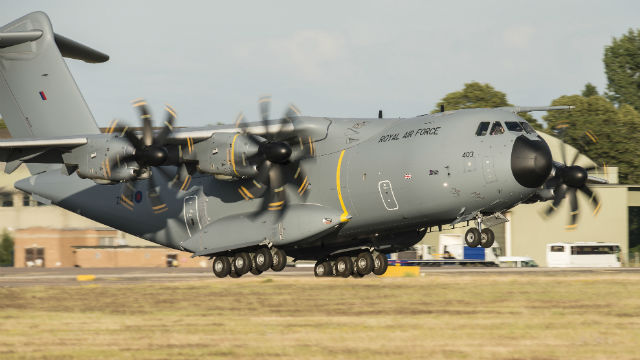 ZM403 is the RAF's second A400M delivery of the year, with its arrival having been delayed by a grounding period imposed following the crash of an "Atlas" in Seville on 9 May. UK operations with the type resumed on 16 June.

"Having now undertaken and completed thorough checks on the UK's A400M aircraft, I am satisfied that we have fulfilled and allowed for the safe delivery of this third aircraft," says chief of defence materiel Sir Bernard Gray.

Being acquired to replace the RAF's already-retired Lockheed Martin C-130Ks, the UK's A400Ms will "over the next 12 months be capable of delivering a wide range of loads, as well as carrying out free-fall and static-line parachuting," the service says. Its first two examples had accumulated a combined 405 flying hours prior to the pause in operations introduced earlier this year.