Saab has begun work to modify a pair of Bombardier Global 6000 business jets to its “swing-role” GlobalEye configuration for lead customer the United Arab Emirates.

“We are building as we speak,” Saab chief executive Håkan Buskhe told journalists during a 17 May briefing in Stockholm. “It’s full speed ahead in our workshop.”

The Swedish company signed a $1.27 billion deal with the UAE at the Dubai air show in November, with the heavily adapted Global 6000s to be capable of conducting airborne early warning and control (AEW&C), maritime and land surveillance and electronic intelligence duties. 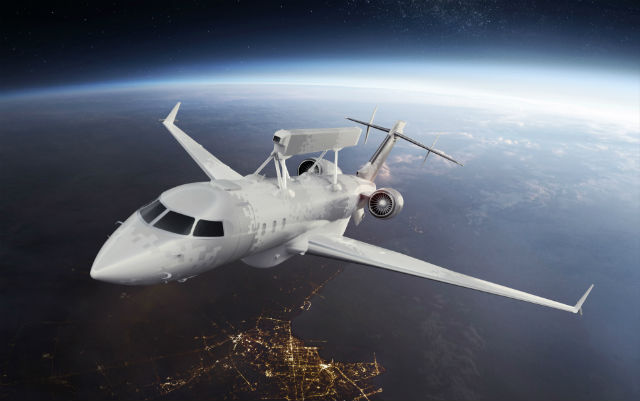 Speaking during a webcast briefing on 12 May, Micael Johansson, the head of Saab’s surveillance business area, said the launch order from the UAE has prompted a rush of interest in the company’s new offering.

“The aircraft is already in Linköping, and we are integrating our systems on it,” he says. “There is a lot of interest around this platform and its capabilities from many countries – some in Asia, some elsewhere.”

Modifications will include installing Saab’s Erieye ER active electronically scanned array radar in a dorsal unit above the fuselage. “It looks the same, but it’s very much all new on the inside, including all the signal processing,” Johansson says. “We have fantastic range on this radar: it’s almost horizon-limited in terms of how far it can see,” he adds.

Command and control tasks can be performed using an onboard crew of between five and seven operators and the aircraft will also feature voice and satellite communications equipment and a Link 16 data link to network with other airborne, ground and maritime assets. Saab cites a maximum mission endurance of 11h for the GlobalEye.

“This is a complete system for all dimensions,” says Johansson.

Highlighting Saab’s past provision of Erieye-equipped aircraft to eight nations, Johansson notes: “Some of these countries might upgrade their capability, but there are many new countries looking at this capability that formerly looked at our competition, like the Boeing [737-based] MESA or the [Northrop Grumman E-2D] Advanced Hawkeye.”

Erieye radars have previously been installed on Saab 340 and Saab 2000 airframes for Pakistan, Sweden, Thailand (below), the UAE and an undisclosed customer – listed by Flightglobal’s Fleets Analyzer database as Saudi Arabia – and also on the Embraer ERJ-145 for Brazil, Greece and Mexico. 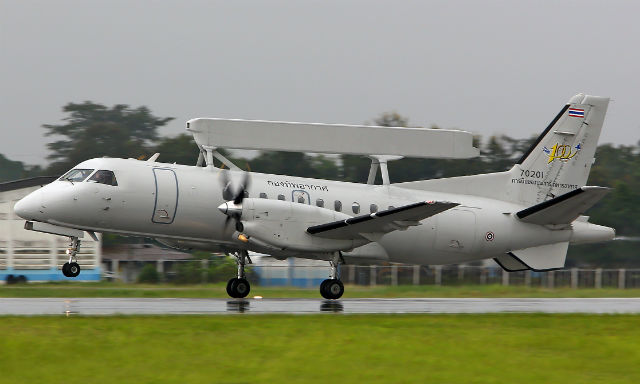 “We have a good customer base, with 20-plus systems, and that’s what we’re looking at going forward – at least – with the new GlobalEye,” Johansson says. The company is aiming to secure at least half of the accessible market for AEW&C orders, he adds, while claiming: “It can do more than the competition, at a lower price.”

No delivery schedule has been revealed for the surveillance aircraft, with Saab attributing this to a confidentiality agreement with its customer.