MBDA has been awarded a demonstration and manufacturing contract worth more than £500 million ($832 million) to deliver a new helicopter-launched anti-ship missile for the French and UK navies.

Signed on 27 March, the deal will lead to the introduction of a new FASGW/ANL weapon weighing around 100kg (220lb), which will succeed the nations’ in-service AS15TT and Sea Skua designs. It will be capable of attacking maritime vessels as well as coastal and land targets, MBDA says.

Being spearheaded by the UK Defence Equipment and Support organisation, the programme reached the contract stage after being discussed at a bilateral summit involving UK Prime Minister David Cameron and French President Francois Hollande earlier this year. The UK’s commitment to the project is worth £280 million, its Ministry of Defence says. 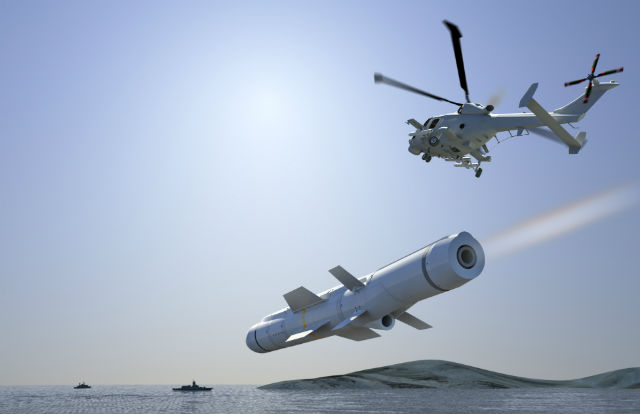 The Royal Navy will use the FASGW (Heavy) missile with its AgustaWestland Wildcats, while France is expected to integrate the ANL with its maritime NH Industries NH90s, and potentially the Airbus Helicopters AS565 Panther.

Work on the joint weapon system began in 2009, when MBDA was awarded an assessment phase contract.

Speaking at an annual results briefing in London on 19 March, MBDA UK managing director Steve Wadey said the FASGW/ANL project will be the first to use the European company’s new ‘centres of excellence’ model. The weapon’s actuators and datalink will be developed in the UK, while its control system and test equipment will be sourced from France.