Parked at Kandahar airfield when the storm hit, the C-130Js each experienced an average of 2,000 individual impacts during the event, with damage sustained to their upper fuselages and flight control surfaces. Multiple other coalition aircraft were also affected at the same location.

“Repairs to the five C-130J Hercules aircraft are being undertaken via existing contractual arrangements. We estimate the total cost of repair may be up to £10 million,” says armed forces minister Philip Dunne. “Some £5.9 million of repair work has already been completed by Marshall Aerospace and Defence Group, and all five aircraft are now back in service,” he adds. 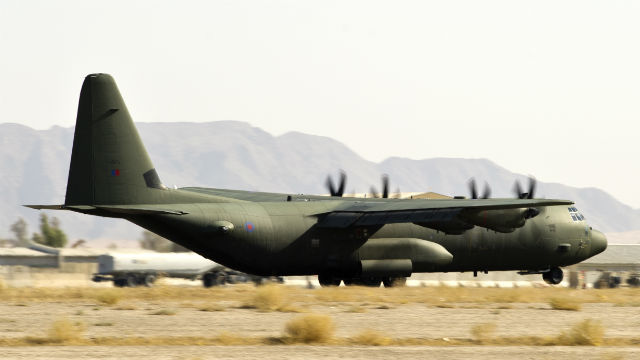 Performed via the Ministry of Defence’s Hercules Integrated Operational Support deal with the company and Lockheed, the repair effort involved replacing damaged ailerons with parts sourced from retired C-130Ks, and initially patching up composite parts punched through by the golf ball-sized hailstones. Detailed repairs were then conducted at Marshall’s Cambridge airport site in the UK. Four of the aircraft were returned to operational duty by mid-September 2013, while the other was in pre-planned depth maintenance.

Also damaged in the incident were a BAe 146 C3 transport which had been deployed to Afghanistan by the RAF for the first time only the previous day. This was subsequently flown back to the UK for repairs, and is also now back in operation. One of the service’s BAe 125s – identified by Flightglobal’s Ascend Online Fleets database as ZD704 – was written off, while the full extent of damage to a number of UK-operated AgustaWestland Lynx, Boeing CH-47 Chinook and Westland Sea King helicopters has yet to be disclosed.

“Costs associated with the repair and recovery of aircraft to date total some £8.7 million,” Dunne says. “As some aircraft are still being assessed for repair, the total cost of Operation Weatherman is not yet known.”