UPS Airlines is expanding its Boeing 747 Freighter network beyond Asia, announcing it has launched a round-the-world 747-8F operation that includes a new route between Dubai and the company's Louisville hub.

The news comes several days after UPS announced it placed a firm order with Boeing for 14 new 747-8Fs.

UPS started operating the new Louisville-Dubai route once weekly on 6 January and will transition the service to five-times weekly service starting 27 February, it says. 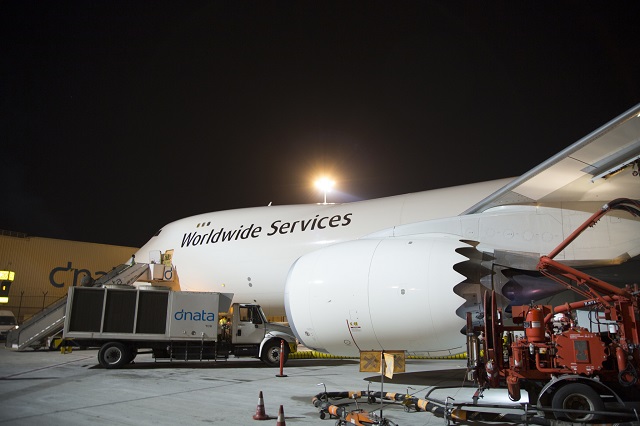 At 6,691nm (12,392km), the route is the furthest regularly-scheduled route UPS has ever operated. The route is possible thanks to the ability of the General Electric GEnx-2B-powered 747-8F to carry "greater payload over long range", says UPS.

The aircraft can carry 19% more weight and has 16% more volume than UPS' 747-400Fs, the company says. Volume is particularly valuable to UPS because the company typically carries relatively light express packages and often maxes out the volume of its aircraft before hitting payload limits, UPS says.

After arriving in Dubai, the 747-8F will fly onward to UPS' Asia-Pacific hub at Shenzhen in China before continuing to Anchorage and back to Louisville, says UPS.

The new route reflects UPS' plan to expand its presence in Dubai, where the company bases its operations in India, the Middle East and Africa.

The new Louisville-Dubai will also free up more capacity on the company's existing flight between Cologne in Germany and Dubai, says UPS.

“Our customers are demanding more capacity,” says UPS Airlines president Brendan Canavan in a media release. “UPS has made a strategic investment in 747-8 jumbo jets, the largest aircraft we have ever flown, to offer sustainable lift on long-range international routes like this.”

Etihad Cargo and Emirates SkyCargo already operate flights between the United Arab Emirates and the USA.

Etihad operates a freighter from its Abu Dhabi base to Columbus (Ohio) and Washington, DC, while Emirates flies freighters from Dubai to Columbus, Fort Lauderdale, Houston, Los Angeles, New York and Orlando, according to the carriers and to FlightMaps Analytics.