A Boeing MD-11 freighter operated by United Parcel Service (UPS) experienced the collapse of its nose wheel during a failed takeoff from Seoul Incheon airport.

The aircraft (N277UP) was operating flight UPS61 on the Seoul Incheon-Anchorage route, and the incident occurred at 10:30pm local time on Monday 6 June, says UPS.

There were four crew aboard the jet, all of whom escaped safely via the forward left-hand slide.

Images from Incheon show the nose of the aircraft resting in grass beside the runway. An official at Seoul Incheon told Flightglobal that the incident happened 350m down the runway, but he declined to provide the runway number. 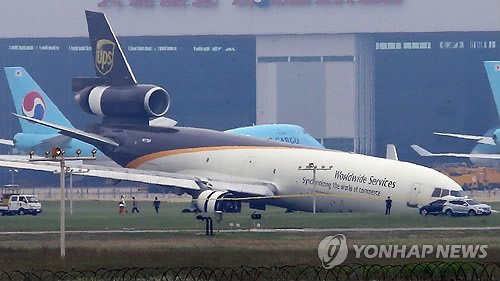 The damaged aircraft resulted in the runway be shut for traffic. UPS says the aircraft is cleared to be moved, but still remains where the incident occurred.

An investigation will be conducted by South Korean and US officials.

Flightglobal’s Fleets Analyzer shows that N277UP bears the MSN 48578. Powered by three Pratt & Whitney PW4460 engines, it was originally delivered to Japan Airlines in 1995 as a passenger aircraft.

In 2004 it was purchased by Boeing Aircraft Holding Co, which then sold it to UPS. In October 2004 it was converted to a cargo jet with the installation of a cargo door. It has served with UPS since November 2004.