The battle over the future of the US Air Force's fleet of Fairchild Republic A-10s has moved to the US Congress, with lawmakers questioning the service's plan to retire its roughly 320-strong fleet.

The aircraft are on the USAF's chopping block, having been identified as targets for retirement in its recently released fiscal year 2015 budget proposal. Congress must still approve the proposal, however – a process that will take months to complete.

Democrat Ron Barber, whose Arizona district includes Davis-Monthan AFB, where A-10s are operated, is among those taking issue with the prospect of A-10 retirements. He asks if the USAF can provide effective close-air support within 100m of troops, and when cloud ceilings are less than 1,500ft (457m) without A-10s.

"This is what the A-10 does best," Barber says. "There are critical elements of the close-air support mission that multirole fighters simply cannot perform like the A-10."

"I think the ones we should probably be asking about the A-10 are the ground forces that have their lives saved by the A-10s," says committee chairman Republican Buck McKeon of California. 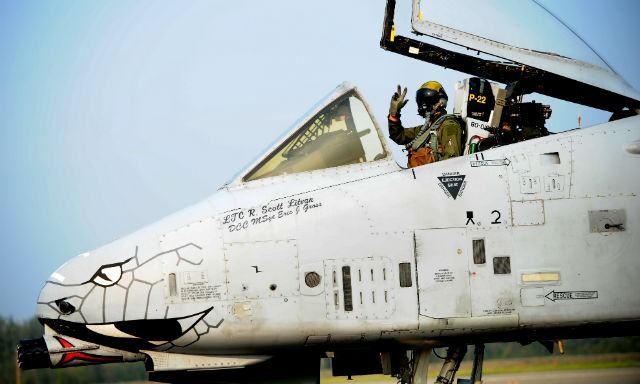 While conceding the A-10's effectiveness at close-air support, James and Welsh defended the plan.

"What I have learned over time is that although [the A-10] does do close-air support superbly, other aircraft can do it as well," says James, noting that 80% of close-air support in Afghanistan has been provided by other types of aircraft.

"The mission would be covered" by fighters like Lockheed Martin F-16s, although those pilots may need additional training, James says.

"Cutting the A-10 fleet was the lowest risk option," Welsh says. "It's the right decision from a military perspective," he says, adding that the service will save $3.7 billion over five years with the retirements. "Close air support is not an aircraft, it is a mission," he says.

In addition to mothballing A-10s, the USAF proposes retiring its fleet of Lockheed U-2 high altitude reconnaissance aircraft, instead using Northrop Grumman Global Hawks exclusively for that mission.

"Having both fleets would be terrific, but it's not affordable," says James. "When you add those two [aircraft programmes] together, we are above the validated requirements for high altitude reconnaissance."

The Pentagon has been forced to make the cuts due to ongoing budget pressures set in motion by the Budget Control Act of 2011, signed by President Barack Obama. That law shaved $487 billion from the Department of Defense's budget over 10 years. It also triggered additional spending cuts known as sequestration, which will run through 2021.