VIDEO: How Martin-Baker rises above the rest

Almost 70 years ago, a pioneering British company performed its first test of an innovation which was to transform the cockpit of the jet fighter, and has since saved the lives of thousands of pilots.

Carried out on 24 July 1946, the milestone was the first in-flight use of a Martin-Baker ejection seat. Conducted from the rear cockpit of a Gloster Meteor flying at 278kt (515km/h) and 8,000ft, the test subject was not a fighter pilot, but volunteer Bernard Lynch, who worked for the company as a fitter.

The company is now the world’s leading supplier of such systems. Its headquarters and main production site is located at the end of a quiet residential road in Higher Denham, near Uxbridge, Middlesex – just a few minutes drive from the M25 motorway. Once a First World War army training camp, the site has been home to the now-aircrew survival system specialist since 1929, when it began operating as Martin’s Aircraft Works.

Prototype products included the MB2 and MB3 fighters, which were first flown in 1938 and 1942, respectively, and the MB5, which took to the air in 1944. Further designs included the jet-powered MB6, which never flew. 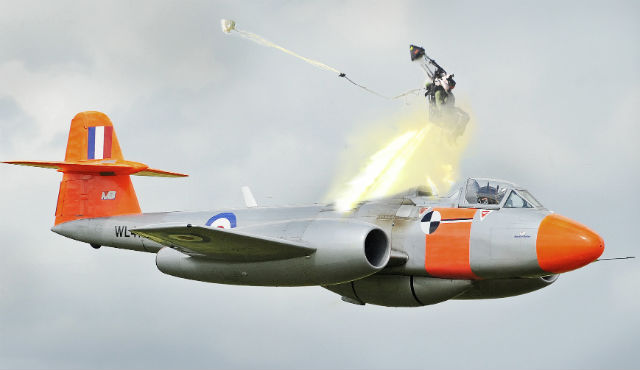 Martin-Baker still uses the Meteor as a test aircraft

However, company founder (and later Sir) James Martin’s interest in developing a crew survival system had been sparked by the loss of his friend and test pilot Capt Valentine Baker, who was killed when his MB3 crashed due to engine failure in September 1942.

Within less than four years the Mk 1 ejection seat was being tested in the air by the renamed Martin-Baker, and by 1951 it was an operational system, installed on types including the Royal Air Force’s V-bomber force.

New and improved seat designs for additional aircraft types followed swiftly, and by May 1965 the first 1,000 lives had been saved. Within less than three years this number doubled – in no small part due to attrition encountered by the US military during the Vietnam War. A record 450-plus ejections using M-B seats were made in 1967 alone, and its 3,000th life was saved in July 1971.

By mid-June 2014, a total of 7,444 lives had been saved as a result of the use of the UK company’s ejection seats. This includes 21 crew members who escaped stricken types in 2013, and from Beechcraft T-6, Boeing F/A-18E Super Hornet, Dassault Mirage 2000D, Israel Aerospace Industries Kfir, Nanchang A5, Panavia Tornado and Sepecat Jaguar combat and trainer aircraft so far this year.

The number of ejections recorded per year has decreased dramatically since its peak, with the 6,000th life saved in December 1990 and the 7,000th in June 2003. However, the pride of the Martin-Baker workforce is apparent immediately on entering its reception building, where single-sheet reports are displayed detailing recent equipment successes.

Today, there are more than 16,800 Martin-Baker ejection seats installed on 51 aircraft types for 88 operators around the globe, with more than 5,200 of this total on board US military assets. In its history, the company has now delivered more than 85,000 seats for around 200 different models.

According to its own data, 54.3% of all ejection seats in global service are M-B products. Its closest rivals are United Technologies Aerospace, with almost 5,200 – primarily in the Boeing F-15 and Lockheed Martin F-16 – Russia’s Zvezda, at nearly 4,400, and China’s CATIC, at more than 1,700.

“We’ve not lost an ejection seat competition since 1973,” says joint managing director and technical director James Martin. “We know we’ll be technically superior – what is important is the price.”

The company has a workforce of roughly 700 people at its main site, plus around 50 at Chalgrove in Oxfordshire – the site of its pyrotechnics and test activities.

Training types equipped include the Alenia Aermacchi M-346, BAE Systems Hawk, Boeing T-45, Dassault/Dornier Alpha Jet, Hindustan Aeronautics HJT-36 Sitara, Korea Aerospace Industries T-50 and Northrop F-5 and T-38. In mid-June, the company completed a programme to install US16T seats in 456 of the latter type. The activity – which introduced the capability for crews to escape an incident even while stationary on the ground – was managed from Martin-Baker America’s Johnstown, Pennsylvania site. Established in 2001, this has around 140 employees.

Multiple primary trainers also use M-B products, including the Beechcraft T-6, Embraer EMB-314 Super Tucano and Pilatus PC-21. Notably, its new lightweight Mk 17 seat is being offered for elementary/basic trainers, such as the Grob Aircraft G120TP. The system can be operated at ground level from a forward speed of 60kt (111km/h).

According to director of business development and marketing Andrew Martin, the low-cost counter-insurgency aircraft market also offers a promising business opportunity. The company has supplied US16T seats for the Textron AirLand Scorpion prototype, which will be making its debut international appearance in the UK during July, and the firm is also eyeing the potential to equip the armed AirTractor AT-802U.

All eyes will be on the F-35B Joint Strike Fighter as the type makes its first high-profile appearances at the Royal International Air Tattoo and Farnborough air show. As with the programme’s other two variants, its pilot’s last line of defence is the US16E ejection seat.

M-B in mid-June delivered its 150th seat for the F-35, from a projected programme total of more than 3,000 aircraft.

Developed and tested over the course of more than a decade with the involvement of 43 UK companies as suppliers, the US16E has posed multiple technological challenges, with an ejection speed requirement of 0-600kt.

The single design must accommodate the full US pilot weight range, from an unclothed 46.7-113kg (103-250lb), plus personal equipment. This requires three different seat tilt positions and a vertical adjustment function of up to 7.5in.

With F-35 pilots to use a helmet-mounted display to receive their primary flight information, the seat manufacturer has also been required to create a system which is capable of protecting an ejectee’s neck when exiting the aircraft. The solution involves a trio of airbags, activated behind and to either side of the neck.

The US16E also uses a “fifth-generation” four-point harness design already supplied for the NATO Flying Training in Canada programme’s Hawks, plus passive arm and leg restraints. An MWARS [Martin-Baker water-activated release system] automatic activation function was also mandated, to prevent a pilot from drowning if unconscious when landing in water. A new electronics unit contained within the harness release mechanism must detect a set level of salinity before activation.

“We are now looking to deploy that into many other platforms,” says engineering director Robert Martin, with interest having already come from Germany, Singapore and Taiwan.

“We’re at the limit of how fast you can put a person on a parachute,” he says. As a result, the US16E contains an in-seat sequencer – a computer which measures factors such as ejection speed and altitude, and optimises the escape by making physical loads as small as possible.

Martin-Baker’s introduction of such advances stems from its internal research and development spending. “We always invest in R&D, and try to be three or four years ahead of the game,” says James Martin. This represents a commitment worth around £10 million ($17 million) per year by the family-owned company.

Production totalled 850 ejection seats in 2013, and multiple future prospects exist to sustain or expand this. A leading opportunity is the USAF’s planned T-X trainer acquisition to replace the T-38, with Martin-Baker offering a design similar to its current US16T seat for all candidate types.

Further ahead, the company will seek to be involved as the USAF and US Navy define their survival system needs for a future “sixth-generation” fighter, and also for the former’s future long-range strike bomber.

The retrofit business, such as that which led to the installation of more than 900 new seats in the USAF’s T-38s, is another target. “We are positioning ourselves now to develop a retrofit for the [United Technologies] ACES II in the F-15 and F-16,” says Andrew Martin. Maintenance, repair and overhaul business is also likely to increase, as air forces contract some flight training services out to industry.

Now accounting for 10-15% of the company’s annual turnover, the design and production of crashworthy seats for helicopters like the Sikorsky S-92 and UH-60M Black Hawk is another potential area of growth.

Another goal is to supply new indigenous fighter programmes in nations like India, Japan, South Korea and Turkey, where M-B already has strong links as a supplier.

“We’re very bullish about the future of the company – and escape systems,” says Andrew Martin.