Qatar Airways chief executive Akbar Al Baker has hinted at further A380 orders after taking delivery of his first superjumbo at Airbus's Hamburg plant on 16 September.

Qatar - the only airline to operate all of Airbus's widebody types - has 10 A380s on order, plus three options. Al Baker said a decision would be taken soon on whether to confirm the options and possibly commit to more. "Once delivered, we will see its performance and, if it exceeds our expectations, we will firm up the three airplanes and maybe take some more," he said at a press conference ahead of the delivery ceremony. 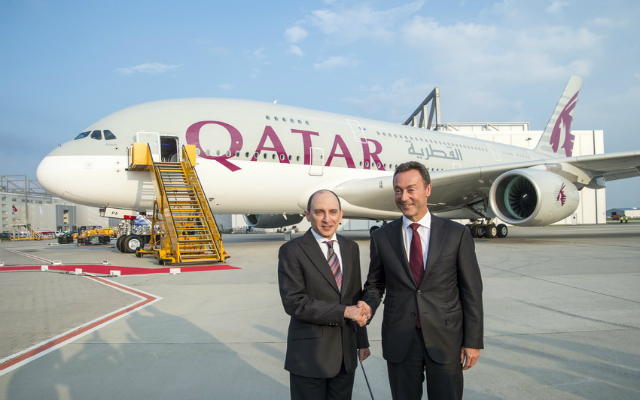 Qatar's first A380 is due to be flown to Doha on 18 September and will begin service on the Doha to London route on 10 October. A second superjumbo, on display beside the first aircraft at the ceremony in Hamburg, will serve Paris from later that month. Al Baker expects two further A380s by the end of the year, but, while refusing to name additional destinations, had a jibe at Lufthansa, which has been lobbying against Qatar's expansion into Germany. "The third and fourth [routes] I will keep as a suspense because I want to surprise our competitors, especially our competitor in this country who is very concerned about our growth," he said.

Al Baker refused to blame Airbus for the failure of Qatar's first A380 to display at July's Farnborough air show - the first aircraft was supposed to be delivered before the event. With the airframer's chief executive Fabrice Bregier beside him, he said the delay in delivery was down to Qatar's high standards. "It's from us because of our very stringent demand for quality. No [other airline customer] would have delayed it for the reasons we did."

Al Baker described taking delivery of the A380 as a "proud moment", describing the aircraft as a "masterpiece which transcends anything the aviation world has seen before".

Qatar's A380s will be configured with 517 seats, 461 in economy, 48 in business and eight in first, with the premium cabins on the upper deck. In a sideswipe at his Gulf rival Etihad's A380 recently-revealed cabin product, he apologised for not offering "residences, butlers or suites", but said that instead, Qatar's interiors had "class."