AirTanker expects the Royal Air Force’s next two Airbus A330 Voyager tanker/transports to be delivered by mid-year, with the Ministry of Defence having agreed to a slight delay in its previous schedule.

Six Voyagers are now being flown by the RAF’s 10 and 101 squadrons from Brize Norton in Oxfordshire, with another, unmodified example being used by civilian crews to transport personnel to and from the Falkland Islands.

The Voyager had been scheduled to achieve full release to service status with the delivery of the programme’s ninth aircraft in May, but AirTanker says the RAF will now get its eighth example late that month and the latter during June. However, this will now arrive from Airbus Defence & Space’s Getafe modification site near Madrid, Spain with its enhanced defensive aids system equipment already installed. This will remove the need for the aircraft to undergo a roughly 60-day modification after its delivery. 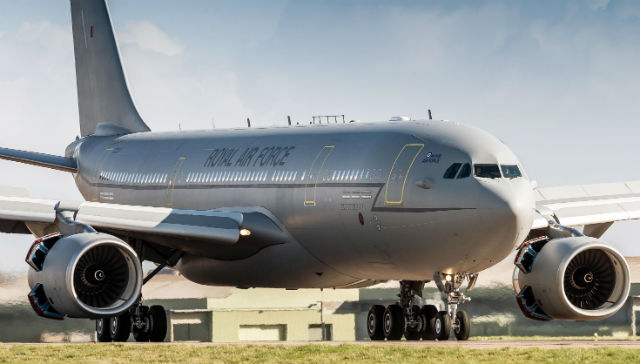 With the RAF’s last Lockheed TriStar tanker/transports being flown into retirement on 25 March, the Voyagers are now providing a full range of services, says Wg Cdr Jamie Osborne, officer commanding 10 Sqn. This involves flying military personnel to and from Afghanistan, and supporting Eurofighter Typhoons providing quick reaction alert cover for the UK and the Falkland Islands.

Pointing to the A330’s extended-range capability over the TriStar and the UK’s previously-retired Vickers VC10s, Osborne says: “This aircraft has got legs – it’s a real step-change for the RAF.”

Already capable of refuelling the Typhoon and Panavia Tornado GR4 from its under-wing hose-and-drogue refuelling pods, the Voyager is also poised to secure full clearance to refuel large aircraft like the Lockheed Martin C-130J from the centreline hose drum unit installed with part of the fleet, AirTanker says.