Airbus incurred a fresh charge of €80 million ($93 million) against its A400M programme in the third quarter of this year, as the company remains in discussion with its European customers over delays to the tactical transport.

Detailed on 31 October, the new sum – which Airbus says is linked to "the production adjustment and liquidated damages incurred", takes the company's total charges taken against the A400M this year to €150 million.

Deliveries of the Atlas totalled 12 units in the first nine months of 2017: one more than during the same period last year. Recent transfers included the programme's 50th production aircraft, which was handed over to the German air force on 29 September.

"Production levels were adjusted to absorb inventory, with delivery schedules still in discussion with customers," Airbus says. Being conducted via Europe's OCCAR defence procurement agency, this process is intended to "de-risk" the programme, it adds.

"Development activities continued toward achieving the revised capability roadmap," the company says. "However, achievement of the contractual technical capabilities and associated costs remain highly challenging. There are also challenges remaining on securing sufficient export orders in time, on cost reductions, industrial efficiency and commercial exposure, which could all impact the programme significantly." 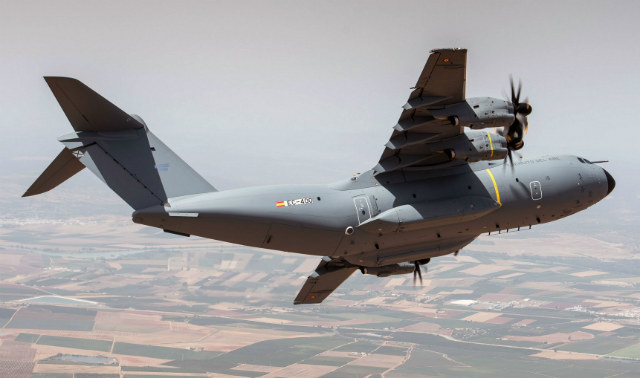 Chief financial officer Harald Wilhelm said during a webcast presentation: "We remain confident on the export potential, but the programme has a substantial lead time, and the focus right now is to deliver the aircraft to the core nations." However, its production rate adjustment "gives a bit more time to catch the export orders in the outer years", he adds.

Airbus details its first 50 A400Ms as having been delivered to six nations: the UK (16), Germany (13), France (11), Turkey (five), Malaysia (four) and Spain (one). A further two examples were handed over during October, including a second for Madrid. The company's order backlog for the type now stands at 122 units, with additional recipients to include Belgium and Luxembourg.