​ANALYSIS: What does Boeing's 777X mean for airlines and Airbus?

When Boeing launched the 777X at last year’s Dubai air show, backed by commitments for over 300 aircraft from four customers, Toulouse’s worst nightmare became a reality. Having suffered at the hands of Boeing in the “big-twin” sector for much of the last decade,, Airbus has been making good headway with its A350 XWB, racking up sales of more than 800 aircraft – only for Boeing to come out with an enhanced derivative of its bestseller.

Unsurprisingly, Airbus is dismissive of the threat posed by the new big-twin. But given its backing from blue-chip customers like Cathay Pacific, Lufthansa and the Gulf’s triumvirate of global network carriers, should the European manufacturer be taking the threat from the 777X more seriously? And do the airlines once again find themselves with just one go-to vendor when seeking the largest twin-engined “seat-production machine”?

Airbus’s new-generation widebody products comprise four models: the A380 superjumbo and three variants of the Rolls-Royce Trent XWB-powered A350. Its only in-production widebody twinjet is the A330. Series production of the A350 is beginning as Airbus works towards the first delivery of the initial variant, the -900, to launch customer Qatar Airways in the fourth quarter of 2014.

The 777-9X is the larger variant, featuring a slight stretch over the -300ER and raising seating by around 14 passengers in similar typical layouts. The 350-seat -8X is developed from the 777-200 airframe, with a 10-frame stretch.

Other major changes on the 777X include a larger, composite wing which incorporates folding tips to allow it to use 777-sized parking bays and taxiways, all-new General Electric GE9X engines and a revised cabin. 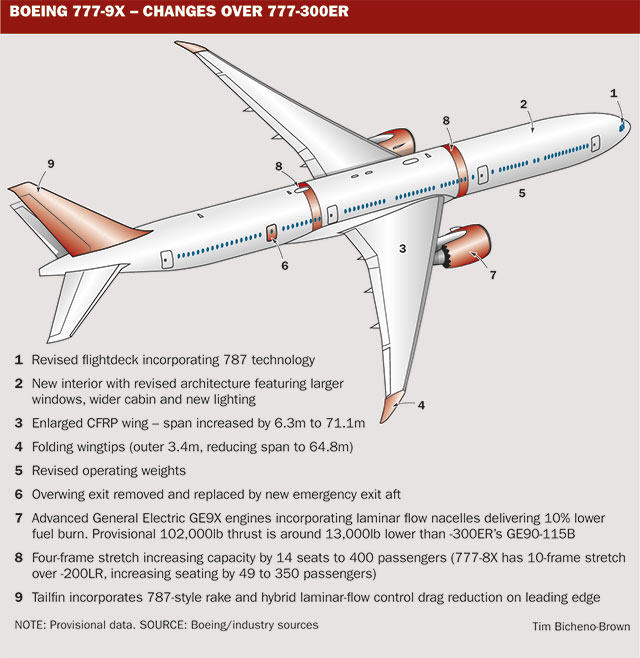 “The 777-8X sits right on top of the A350-1000 in terms of size, but has a range advantage and is slightly more fuel efficient. And then we have the [larger] -9X, which gives us the ability to go into that territory that is unchallenged, which is really, really great,” says Boeing’s marketing vice-president Randy Tinseth.

The A350 and 787 met for the first time on the tarmac at February’s Singapore air show, prompting a rise in the rhetoric about the rival manufacturers’ contrasting widebody strategies. Airbus argues that its product line offers simplicity, while Boeing points to an even spread of aircraft across the 200-400 seat sector.

“Boeing has been waxing eloquent about how impressive their widebody product line is. Well actually it looks like a bit of a dog’s breakfast to me,” says Airbus chief operating officer for customers John Leahy. “If they’ve got the sweet spot in the market, there are an awful lot of sweet spots.” 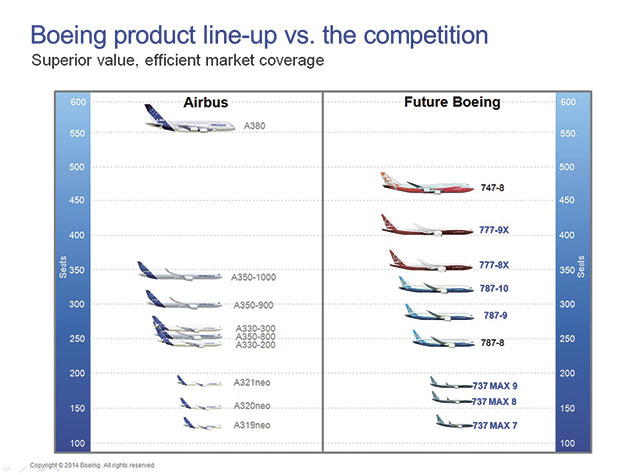 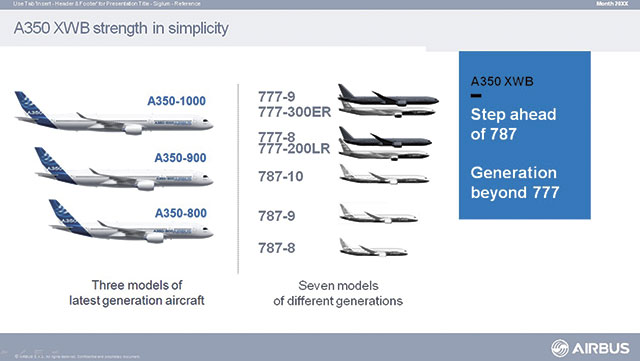 However, Boeing highlights its sales success in the widebody sector as evidence that it has called the strategy right. The market is currently voting slightly in favour of Seattle, with Boeing holding a 55% share of the widebody twinjet backlog.

“We’re very pleased with how we’re positioned with our widebody product offering – from 200-400 seats we have a complete line of 787s and 777s in the marketplace. From orders to deliveries to backlog, we lead the competition,” says Tinseth. “Airbus has a lot of questions it has to answer – what does it do about the A330, about the A350-800 – I think the writing is on the wall already – and about the A350-1000.

Sales of the 777-300ER have outpaced even Boeing’s most optimistic forecasts, with total sales standing at 721 aircraft – including 263 on backlog. Tinseth attributes the -300ER’s surprise success to two main factors: “It crushed the competition – the A340-600 just wasn’t a viable competitor, which helped us, and we recognised that a lot of airlines bought the 747 for its range. But frankly we got that percentage wrong, and more bought it for this capability than for its size.”

Some observers see the A350 family potentially being under threat at both ends. Customers have been abandoning the A350-800 like rats on a sinking ship, switching their orders to the larger variants. This has raised questions over the future of the smallest variant, and comes as Boeing expands its 787 line-up with the launch of the -10 at last year’s Paris air show. Meanwhile, the arrival of the 777-9X could force Airbus to respond with a bigger derivative of the A350-1000.

"We also suspect that the A330-200/300 will exit passenger-variant production towards the end of this decade, largely because the similarly sized A350-900 renders new-build A330-300s economically uncompetitive.

“The Airbus conundrum is do they consider a family below the A350 – potentially covering 220 to 300 seats – or do they consider a 380-450 seat family to close the gap between A350-1000 and 558-seat A380? In demand terms, the 220- to 300-seat sector will probably have greater demand, but the challenge of creating an economically competitive twin-aisle of this size is considerable.

"And if Airbus chooses this route, then it would probably leave the 777-9X to itself in the market, creating the potential monopoly space that would allow Boeing to manage pricing in that space to its benefit – as it has been able to over the past few years with the 777-300ER.”

Cathay Pacific, which is a launch customer for both the A350-1000 and the 777-9X, is the world’s second-largest 777-300ER operator, with a total of 53 in service and on order. The Hong Kong airline’s engineering director Christopher Gibbs sees the two rival twinjets as complementary, and is not concerned that one manufacturer could gain a monopolistic position.

“Competition is useful, but I’m not sure it’s sufficient to completely duplicate on each other,” he says. “We see the positioning between the 777-9X and the A350-1000 as a bit different – the -9X is bigger. So for routes that need a smaller demand, the -1000 is appropriate, and for routes with bigger demand, the -9X is right.”

Airbus chief executive Fabrice Bregier attributes Boeing’s decision to add a stretch to the 777-9X (over the -300ER) to the need for competitive economics, but he leaves the door open to a competitive response with the A350.

“The 777X has to be slightly bigger because it could not compete against the A350-1000,” says Bregier. “So they were in the sweet spot [with the 777-300ER] – which was 360 passengers in three classes – and we just took over this sweet spot. So we believe the A350-1000 and A380 should be more than sufficient,” he says. “However, in the long run we are improving our product, so we have no short-term/mid-term plan to do that [a stretch], and we don’t think we have to do that, but we could well envisage additional members of the A350 family.”

Cathay’s Gibbs says the airline selected the 777-9X “most importantly” because it offers around 14 more seats than its 777-300ERs. “So it’s a plane for growth on our long-haul routes which need more capacity. And it will fly long-haul routes extremely efficiently,” he says.

Gibbs says that fuel accounts for 65-70% of Cathay’s incremental costs on long-haul operations, “so fuel-burn efficiency is really paramount and is a really important factor in our decision making”.

Despite Boeing’s early sales success with the 777-9X, Ascend’s head of market analysis Chris Seymour is not convinced Airbus needs to respond, as the A350-1000 is “ideally placed” to replace 777-300ERs – combining similar capacity and better economics. “Emirates Airline president [and A350-1000 customer] Tim Clark says it’s the ideal aircraft for 10-hour missions with no crew-rest requirements. The 777-9X also looks to be very good in terms of range, economics, cargo capacity and 30-40 seats more – ideal for growth over -300ERs at carriers like Emirates,” he says.

Airbus aims to decide this year how it will tackle the market below the A350 – which could include addressing the -800’s sector – as it evaluates whether to develop an upgraded “A330neo” powered by new generation engines.

He adds that making small tweaks to optimise the aircraft could also bring about “pretty good improvements".

"We’re not going to go back to the same situation with the original A350, where we got into a loop chasing weight, then went into the carbon wing,” he says.

Although the A330 has been in production for more than two decades, Williams believes that there is still “a very good market” for the twinjet, especially for operators who do not need the range of the A350 or Boeing 787, because of its lower price tag.

“We think there is an opportunity to keep flying the A330 alongside the A350 for quite a period of time. We don’t see it as a case where the A350 comes in and suddenly the A330 disappears. We think we can keep building the A330s, certainly through this decade,” says Williams.

The 777X’s arrival potentially creates a few headaches for Boeing’s long-term product strategy, namely around how it manages the transition – both production and sales – from the current 777, and the implications for the slow-selling 747-8I.

From a transition perspective, Boeing’s current backlog for the -300ER (and 777 Freighter) of approximately 300 aircraft represents around three years of production at current rates, which means it still has some way to go in sales to bridge to the introduction of the 777X in 2020. Observers expect there will be a one- or two-year overlap between the 777-300ER and the 777X, which would mean production ending in around 2022.

Boeing has “a plan” for when production will switch over, “but we’ve not shared that”, says Tinseth.

“We can take a similar approach from when we went from the 737NG to the Max – that was a successful strategy, and we can do many of the same things,” says Tinseth. “When we went to our customers with the Max, we coupled those with NGs to help with their transition as well as with ours. We’re going to take that same mentality into our 777 campaigns.”

The 777F could also come into play, says Tinseth. “Our competition doesn’t have a freighter, so if the cargo market turns around as we expect it will, we have the 777F to help with the transition.”

Ascend’s Morris believes the plan to use the 737 Max transition may not be quite as straightforward as Boeing anticipates, however. “When said quickly, it sounds easy to run the same transition plan. However, the 777 customer base is a little different, with fewer operators and more concentration. So I wonder how big fleet operators will react to the prospect of having to take some last-off-the-line 777-300ERs whilst they wait for their 777Xs,” he says. 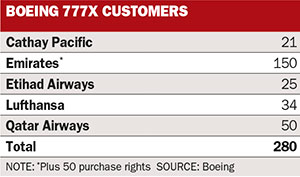 Morris also thinks that there could be issues around residual values: “777-300ERs will typically be on 12-year finance terms or operating leases, so how will Boeing incentivise operators to keep those last-off-the-line -300ERs for 12 years in the face of their fuel-burn penalty over 777Xs?

“I guess that will depend on where fuel prices are in the 2020s, but it seems likely that some deep discounts will be required to place -300ERs rolling off the line through the transition phase."

Despite being slightly smaller than the 747-8I, if the 777-9X delivers on its operating cost promises then it will clearly pile pressure on the Boeing’s four-engined legend. But Boeing is confident the 747 programme can cope with some sibling rivalry.

“We’ve positioned the 747-8I to be 15% larger in seat count than the larger 777X, the -9X,” says Scott Fancher, who is Boeing’s general manager of airplane development. “The 747-8 is also a great freighter – it’s a great ‘switcher’, to use an American baseball term – and that gives it great legs in the marketplace to run the distance.”

Tinseth says Boeing was pleased to secure 17 gross orders for the 747-8 during 2013, which is “right in line with our production rates”, but he warns that it has “got to do that every year” to ensure continued production of the big jet is viable.

So the 777X arrival creates new challenges for both major airframe manufacturers, but it is Airbus that has the most questions to tackle, and we should begin to see some answers before 2014 is out.