Energy-harvesting windows, green diesel biofuel and a 3D-printed flightdeck monument are three technologies that will be tested on the last series of flights of a TUI Group-branded Boeing 757 ecoDemonstrator destined to be dismantled by the end of July.

Boeing has partnered with the Aircraft Fleet Recycling Association to disassemble the 757 at the conclusion of the tests. In the pioneering spirit of the ecoDemonstrator programme, however, the dissaembly will serve as an opportunity to validate a variety of new options for recycling the various materials and systems.

“We are going to recycle the heck out of the airplane,” says Jeanne Yu, Boeing’s environmental performance director in a recent interview.

Boeing will look to recycle some components in the existing fleet or recycle pieces to be used in other ways on flying aircraft, she says.

Until then, the 757 ecoDemonstrator will continue a new series of flight tests after a first series concluded two months ago. 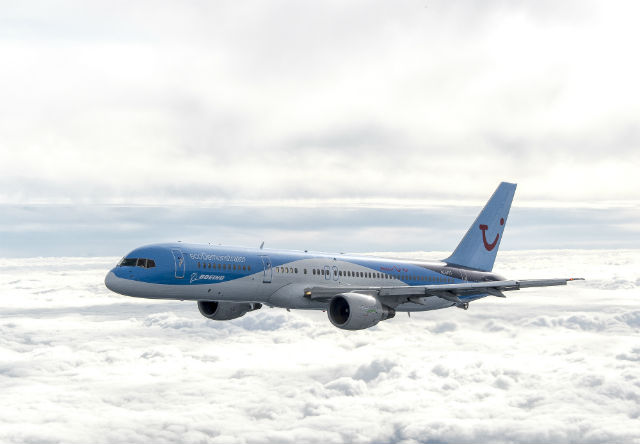 Since 2001, Boeing has used a string of borrowed commercial aircraft to serve as testing platforms for the Quiet Technology Demonstrator and ecoDemonstrator programmes.

The first series of flights on the 757 focused on several drag-reducing technologies, such as an active flow control system mounted on a tail fin, bug “phobic” coatings on the leading edge of the right wing and a laminar flow-protecting Krueger flap on the left wing.

The second series of testing began on 17 June with a flight from Seattle to NASA’s Langley Research Center in Hampton, Virginia, using a biofuel blend composed of 95% petroleum jet fuel and 5% sustainable green diesel.

Antoher technology is focused on reduced the weight and power requirement to operate the electrically dimmable windows on the 787 fleet. The ecoDemonstrator will evaluate two different energy harvesting technologies. One uses a photovoltaic cell embedded in the window to collect solar energy during flight to power a battery. A competing technology harvests energy by using the temperature differential between the cold outer pane and warm inner pane.

Finally, the 757 ecoDemonstrator flight deck also features an aft aisle stand made using scrap carbonfibre material from the 787 production system. A 3D printer was used to transform the scrap material into the aisle stand.