British Army pilots will soon begin flying the service’s delayed Watchkeeper unmanned air vehicles over Wiltshire, once a pending release to service (RTS) approval has been made, a service official says.

“We have very high confidence that interim RTS for flying from Boscombe Down will be received in the next quarter,” says Lt Col Craig Palmer, principal army staff officer for unmanned air systems. This will enable the service to use temporary restrictions around the Ministry of Defence site to transit the short distance to enter segregated airspace above the Salisbury Plain training area.

A Thales UK and Elbit Systems joint venture has so far delivered 26 Watchkeeper air vehicles and 14 ground control stations (GCS) as part of a late-running Ministry of Defence project worth roughly £1 billion ($1.6 billion). Total production will cover a further 28 UAVs and one additional GCS, with the system expected to be retained in service until 2040. 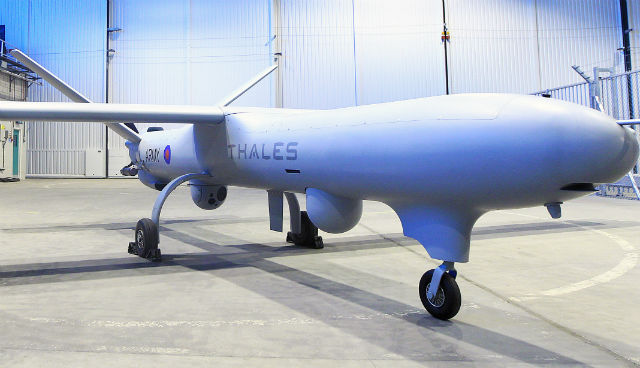 Nick Miller, Thales UK’s business director for ISTAR and UAV systems, says Watchkeeper aircraft have now completed more than 600 flights, exceeding a combined 950 flight hours. While the design’s certification process has taken longer than planned, he notes that approvals from the UK’s civil and military aviation authorities “will give us the accreditation that this is the safest UAV in the world". A statement of type design assurance for the air system was secured last October, and the interim RTS standard will be followed by the later availability of additional communications modes and a wing de-icing capability.

The army currently uses an interim fleet of up to nine Elbit Hermes 450 air vehicles flown from Camp Bastion in Afghanistan, with these providing up to five flights and a combined 70h of surveillance cover per day. Provided by Thales UK under an urgent operational requirement deal, the tactical air vehicles have now accumulated more than 86,000 flight hours in the country, and also previously in Iraq.

Palmer says that a decision on whether to deploy Watchkeeper to Afghanistan has yet to be taken, but hinges on an assessment of “the risk of introducing a new capability, and the operational need”. Fielding the new system would add a synthetic aperture radar and ground moving target indication sensor capability to support coalition and Afghan forces.

“Lessons learned from the [Hermes] operation on Herrick, and also the service inquiry into [the October 2011 crash of aircraft] ZK515 have really helped us to improve the Watchkeeper solution,” he adds, citing a “cultural change around risk assessment".

Once at full strength, the army’s UAS component – which also currently operates the Honeywell Tarantula Hawk, Lockheed Martin Desert Hawk III and Prox Dynamics Black Hornet – will be supported by around 950 personnel, headquartered at Larkhill, Wiltshire. The process of restructuring the Royal Artillery’s current 32 and 47 regiments began last November.