Qatar Airways chief executive Akbar Al Baker declared the Boeing 787 to be a "game changer" as the carrier took delivery of its 25th example in a ceremony held today at the Dubai air show, where the aircraft is on static display.

With Boeing Commercial Airplanes chief executive Ray Conner looking on, Al Baker said: "Being the second-largest operator of the 787s, we are very delighted with the performance of this aircraft."

Qatar's chief has in the past aired grievances relating to the Dreamliner. As development issues pushed back entry into service by three-and-a-half years, Al Baker in 2010 said Boeing had "very clearly failed" with the 787. When battery malfunctions grounded the 787 fleet in 2011, he blamed Boeing for slowing Qatar Airways' growth strategy. 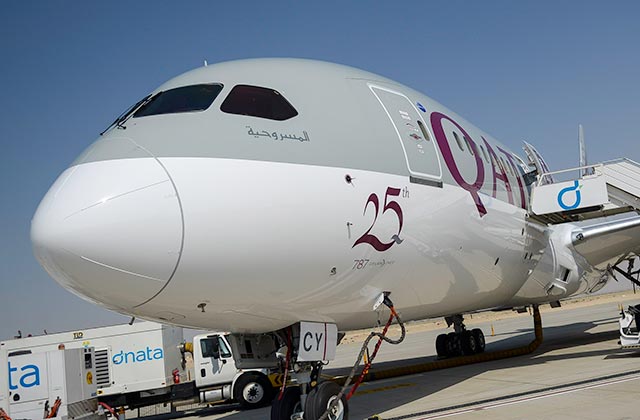 Such issues helped push Al Baker to consider proposals from Airbus for new widebody orders, including the A350-900 and -1000.

But at today's delivery ceremony, Al Baker and Conner both spoke of their warm relationship, with the Qatar chief texting 787 service queries at all hours of the day and night.

"I receive an instant response, which I think is really rare in our industry," says Al Baker.

The Qatar 787 fleet has a "very high dispatch reliability now", he adds..

Conner acknowledges that the 787's development and operational issues in the past caused problems for his customers.

"We put the airlines through a lot of difficulties in the beginning," Conner says. "We've worked very, very hard to make the dispatch reliability come up, get the consistency in our deliveries, and now here we are: 25 airplanes."