The US Navy’s (USN’s) fleet of fixed-wing aircraft has spent more than 62,000 days in maintenance beyond what was expected since fiscal year 2014.

The service’s poor record sharing and maintenance planning caused depot maintenance to be behind schedule 48% of the time on average between 2014 and 2019, says the US Government Accountability Office (GAO) in a new report published on 23 June. 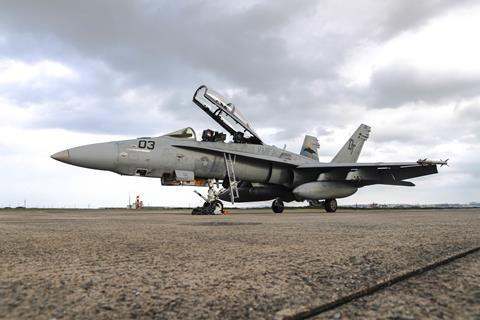 “The navy underestimated the amount of time it needed to complete fixed-wing aircraft maintenance by an average of about 55 days per aircraft,” says the congressional watchdog.

In general, the GAO says the USN’s problems with estimating maintenance needs are the result of three issues: the service did not effectively use historic data on aircraft turnaround time; navy personnel were unaware of maintenance done by operational units or other maintenance facilities; and it did not have a formal process to communicate and coordinate maintenance work between depots.

By comparison, surveyed US Air Force fixed-wing aircraft spent 22,572 fewer days in maintenance than expected between FY2014 and FY2019, notes the GAO.

“Air force officials stated a variety of reasons for completing aircraft maintenance earlier than projected, including frequent communication between programme offices and depot stakeholders,” says the GAO. “For example, Air Force Sustainment Center officials told us that they conduct weekly aircraft performance review meetings with commanders and senior staff to provide a comprehensive status update on aircraft maintenance performance that has occurred since the previous meeting.”

The inability of the USN to predict when aircraft will be available is problematic, says the GAO.

“The ability of these depots to complete maintenance on time directly affects military readiness, as maintenance delays reduce the amount of time during which aircraft are available for operations and training,” it says.

The delays also come after a large amount of funding was invested in both services’ maintenance capabilities.

“The air force and navy have invested about $3.3 billion in their aviation depots’ capital budgets from fiscal years 2014 through 2019, and officials stated they have implemented a variety of initiatives intended to improve on-time performance,” says the GAO.

For their part, USN officials say the range of repair work required was growing and the supply of replacement parts was diminishing, while some aircraft were operating beyond their designed service life. For example, the “classic” Boeing F/A-18 Hornet is operating beyond its expected lifespan due to the delayed receipt of its replacement, the Lockheed Martin F-35C.

The navy completed maintenance activities on the F/A-18 on average about 137 days later than projected – the worst in the fleet.

In response to delays, the USN says in FY2020 it launched an initiative called Performance to Plan, which is focused on improving data collection and using predictive maintenance methods to better forecast future needs.