The Turkish army has received its first nine-strong fleet of Turkish Aerospace Industries T129 ATAK helicopters, the last of which was delivered on 31 July.

The initial batch of the army’s new AgustaWestland AW129 Mangusta-derived rotorcraft is already operational, TAI says, which touts it as “the most advanced combat helicopter in its class”.

TAI started delivering the initial batch of nine ‘A’ model attack helicopters in 2014, while the first examples of the rotorcraft in an advanced ‘B’ configuration with advanced weapons are now expected to follow. The A-model types were ordered under an early-entry urgent requirement, and are expected to eventually be converted into B models.

The army has 60 of the type on order – with 51 now remaining to be delivered – plus 40 more on option, Flightglobal’s Fleets Analyzer database shows. 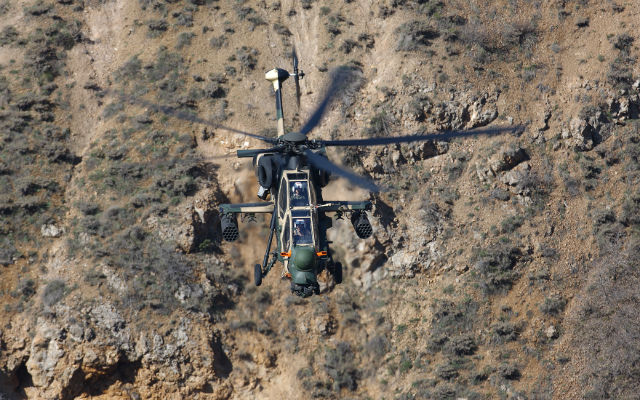 “[The] T129 ATAK is now ready to meet a range of new export opportunities and requirements in the worldwide market,” TAI says.

It adds that the endorsement of the Turkish armed forces will mean that “the already strong international interest in the T129 ATAK as a superior alternative is expected to intensify”.

The 5t rotorcraft is currently being promoted to Poland as it seeks to replace its Mil Mi-24s, with appearances due later this year at the nation’s Radom air show on 22-23 August and MSPO exhibition in September.

Other sales targets include the Commonwealth of Independent States, Asia and the Middle East, where the type will participate in the 2016 Bahrain International Air Show.