IN FOCUS: Dassault question raises its head at EADS

Now that EADS has managed to shake off the chains of French and German state ownership and turn itself into the normal company its investors have long wanted it to become, its investors - one of them, anyway - want it to behave like a normal company. As The Children's Investment Fund Management, or TCI, sums it up, that means to "run the company for profits and the interest of public shareholders" - like itself, a holder of 1%-plus of EADS's shares.

To that end, in a letter to EADS boss Tom Enders, TCI partner Ben Walker has called for EADS to dispose of its shareholding in Dassault Aviation, maker of Falcon business jets, Rafale fighters and an icon of French industry. Walker argues that EADS's 46.32% of Dassault Aviation should be sold by public offering or to a trade buyer, as it is a "poor use of EADS capital [which] provides no synergies and has limited strategic value".

Walker reckons that stake is worth around €4 billion ($5.3 billion), which is equal to more than 10% of EADS's current market capitalisation, and is thus "a poor use of EADS capital". Sale proceeds should go back to shareholders, he tells Enders, either through an extension of EADS's ongoing share buyback scheme or by a special dividend.

Walker approves of Enders and his management team and wants them to invest in EADS rather than maintain a deadweight exposure to the over-supplied business jet market and declining defence budgets. His reasoning is hard to dispute. Unfortunately, however normal EADS may now be in general, in the case of its Dassault interest it remains a prisoner of a long-since failed French industrial policy that, like a blood-sucking vampire, is proving hard to kill.

The EADS stake is a legacy of the Mitterand government's early-1980s drive to nationalise French industry. Marcel Dassault refused, but compromised by selling a non-controlling near-half stake to government-owned Aerospatiale, which went on to be the French component of EADS.

Enders can be taken as agreeing with Walker. EADS's comment on the matter is that "we are pleased to see that they [TCI] recognise the positive and significant transformation of the company in the last 24 months [and] central to our strategy is efficient capital allocation and creation of shareholder value".

Alas, there are no obvious ways to resolve the Dassault question. A heavy three percent of Dassault Aviation shares are publicly traded, but for all intents and purposes its controlled by its founding family. EADS can't sell without French government approval, and Paris would almost certainly veto a sale outside of France. Shareholders of any large French corporation would surely do a Walker and lay a big "non" on any plan to buy a minority stake in Dassault.

As for the cash-strapped French government, it has already slashed its order for Rafale fighters over the next six years from 66 to just 26, as part of a wide-ranging defence spending squeeze. Dassault has so far remained quiet, but €4bn is more than a year's revenue. 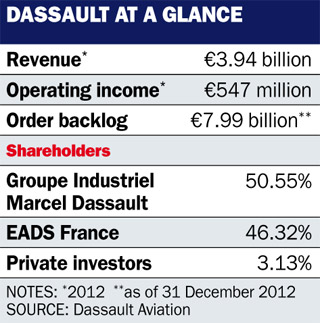 One suggestion made is for EADS to buy the rest of Dassault Aviation, and then sell off Falcon. EADS could afford it, and the defence side of Dassault includes its leadership of the promising Neuron unmanned fighter programme, in which EADS, through its Spanish CASA subsidiary, is only minority a partner.

That solution is a non-starter, and not only because the Dassault family would surely never sell out. Marcel Dassault got his start making propellers during WWI and went on to become one of the great innovators in aviation. But after 1945 he had to start over again, having spent WWII in a German prison camp because he refused to give his company to the Nazis. That moral stand does much to explain a fierce devotion to Dassault Aviation that is literally palpable among its employees even today. Falcon and fighters are both in the blood; to separate them would probably kill the company.

Jefferies equity analyst Sandy Morris sees the problem in the context of a bigger question. The French aerospace industry probably needs consolidation, but there is no clear path to accommodating the interests of France, Dassault, Safran, Thales (of which Dassault owns a short quarter) and other, smaller players. EADS, too, is part of that matrix.

As Morris observes, knocking over any of these "dominoes" would set the others rocking. Thus, whatever the logic driving EADS shareholders, the Dassault question "is not at the top of anybody's agenda".

Indeed, he says, the only reason that anybody is asking the question now is that EADS has been so successful over the past couple years at resolving its own governance issues and sorting out programmes like A400M. Such is the price of success.