The 2016 Flight Fleet Forecast predicts the delivery of 42,800 new commercial passenger and freighter aircraft over the next 20 years, worth almost $3 trillion in 2016 delivery values. Within this total, the regional aircraft market makes up more than 7,000 deliveries, worth about $190 billion. This figure includes both regional jets and turboprop aircraft with 19 seats and above.

This regional sector is currently in a transition period, with new entrants aiming to establish their products and the US market going through a period of aircraft upsizing.

Unlike the single-aisle segment, there are several manufacturers competing for market share. In turboprops, ATR is winning the battle with Bombardier, whereas in the regional jet space, Embraer is facing new competition from Mitsubishi and Superjet.

Bombardier has focused its resources on penetrating the small single-aisle sector with the CSeries, and faces a challenge to avoid being marginalised in the 70-100-seat regional aircraft market.

This sector covers a wide range of aircraft sizes, so it is useful to consider forecast market share in terms of value as well as delivery units. Despite making up more than 3,000 of the 7,000 forecast deliveries, turboprops account for less than one-third of the delivery value for new aircraft.

Turboprops are generally lighter and have lower acquisition costs than regional jets. Combined with better field performance, their lower trip costs give them an advantage in certain markets.

The ATR family has been particularly successful in emerging regions, offering the lowest-cost way of serving remote or island communities, where government financial support to air service is often a factor.

The forecast predicts that ATR will continue to win the lion’s share of deliveries over the medium term, but there may be an opportunity for a new large turboprop family to be developed early in the next decade. This makes up most of the 17% shown as “other turboprops” in the chart, as well as including some smaller types.

The US market remains the preserve of regional jets rather than turboprops. The market there is highly dependent on developments in pilot scope clause contracts with the three major network airlines. 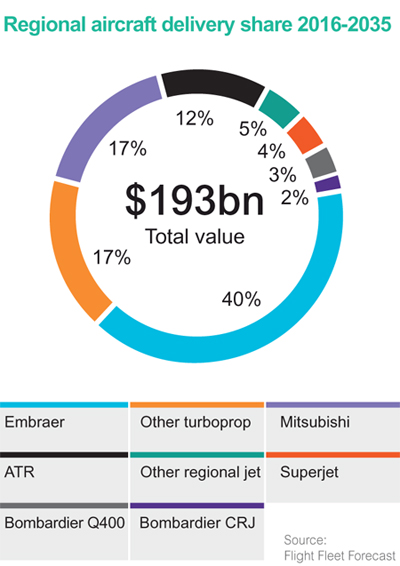 Recently, airlines have replaced many smaller regional jets with a combination of ­76-seat dual-class jets flown under scope rules, but also small single-aisles flown by the major carriers’ own pilots. This trend is expected to continue, at least in the next few years, as the airlines are currently highly profitable and do not have a great incentive to seek lower costs at the expense of disputes with the pilot unions.

There is now very limited ability to add further 76-seaters within current scope rules, and the new Embraer E175 E2 and Mitsubishi’s MRJ90 are heavier than permitted. Therefore, relaxation in scope will be required to fully exploit their range capabilities.

The baseline forecast does assume further scope relaxation to allow these types to be flown, as well as replacement of 70-seaters with 76-seaters in the medium term. If this does not occur, the implication is a lower forecast for the two new types.

The forecast highlights the switch from Bombardier to Mitsubishi in the regional jet market, with the all-new MRJ family predicted to displace the CRJ as the primary competitor to Embraer. The latter is forecast to be the largest manufacturer, delivering more than 2,000 jets over the next 20 years.

However, the large regional jet market is far from a duopoly going forward, as it also includes the Sukhoi Superjet and the Comac ARJ21 from China. The former has over 50 aircraft in service, but the ARJ21 has seen major delays and is likely to remain a niche product.

China is also developing the all-new MA700 70-seat turboprop. Turkey is re-launching the 32-seat 328TP and 328Jet, with talk of a new larger family. Ukraine’s Antonov has ambitions with its turboprop and jet aircraft, and there may even be a rebirth of the Ilyushin Il-114.

In contrast to other sectors, there is little debate about overcapacity or production rate increases. Embraer has been delivering E-Jets at a steady 90-100 units a year in recent times, but Bombardier has cut rates on both the CRJ and Q400 compared with peak levels, and ­Superjet has not been able to achieve anywhere near its targeted production rates to date. ATR leads in turboprop production with about 90 a year and may go higher.

The Flight Fleet Forecast suggests average annual production of 350 aircraft a year, similar to output to the 1980s and 1990s, although the delivery value is much higher.

History showed this could not sustain all manufacturers, leading to the exit of Fokker, Saab, BAE Systems and Fairchild-Dornier. This time around, several new manufacturers have government backing, and commercial sales volumes are not the only measure of success.

The forecast does not attempt to predict the timing of global or regional economic cycles. The regional jet market remains highly dependent on demand in the developed world, whereas the turboprop market has been more driven by developing economies.

Major airlines in North America and Europe have seen profits improve. The US carriers have ordered and taken delivery of many new regional jets, but not so in Europe.

Steady growth, combined with new products entering production gives optimism for the regional aircraft sector, although the crowded marketplace suggests not all programmes are guaranteed to succeed.