A key sensor update for the Dassault Rafale’s in-development F3R software standard is on track to deliver enhanced capability from mid-2018, according to Thales.

Referring to a first test with the Rafale conducted earlier this year, the company says the pod’s electro-optical/infrared sensors “collected high-quality images taken during the ‘day’ channel” on the 2h sortie, which was flown from the DGA defence procurement agency’s Istres test site in the south of France.

Thales has so far secured an order for 20 TALIOS pods – previously referred to as the PDL-NG – from an expected 45 to be acquired for the French air force and navy. Series production of the system will begin in 2018, following the completion of performance measurement tests next year, the company says. 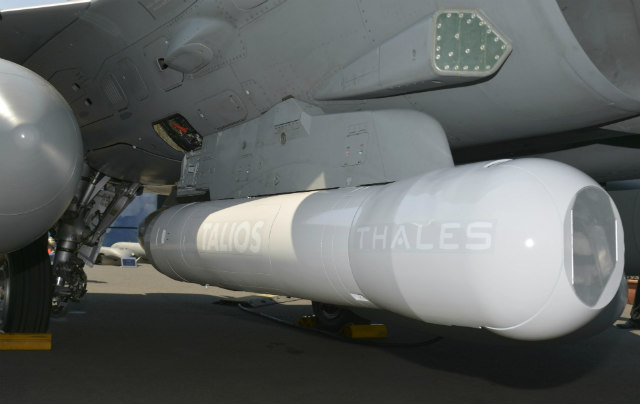 According to the manufacturer, the new pod’s capabilities will range from “[supporting] deep strike with precision-guided munitions to air-to-air target identification and close air support” by day and night.

The Rafale’s F3R standard – which will introduce capabilities including the MBDA Meteor beyond-visual-range air-to-air missile – is due to achieve operational readiness in mid-2018.