By David Learmount in London

In an unexpected twist, a firefighting aircraft in Portugal ended up contributing to forest fires when it was damaged and had to dump fuel before landing, Portuguese national accident investigation agency GPIAA has confirmed.

The aircraft, a Beriev Be-200 twinjet amphibian (pictured below on a publicity flight), appears to have hit treetops following a water-scooping operation from a lake in northern Portugal, receiving damage to one of the engines, which had to be shut down. 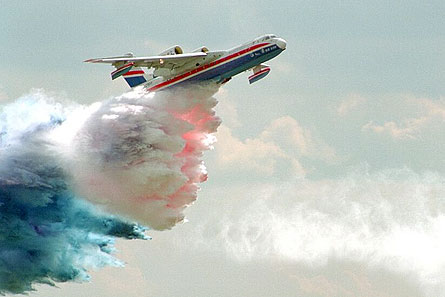 On 6 July the Russian crew of the Beriev were carrying out a water pick-up from the Agueira dam near Santa Colomba Dão, but on climbing away they clipped treetops and at least one of the Progress D-436TP engines suffered ingestion damage and had to be shut down, says the GPIAA.

The crew were forced to dump fuel, which worsened fires that were eventually extinguished by firefighting helicopters. In the meantime, the Be-200 recovered safely to land at Monte Real air force base, from which it had been operating. The amphibian will remain there while the required parts are flown in from the aircraft manufacturer, Russia-based Irkut, according to the Portuguese firefighting agency.

Head of the GPIAA, Col Anacleto dos Santos, says the dammed lake where the aircraft was operating had been properly surveyed to confirm that water pick-ups there by the Beriev would be within its operating envelope, and the site was judged satisfactory. He adds that the weather was not limiting in any way, so the incident looks as if it was the result of pilot misjudgment.

The Beriev is operating on lease to the Portuguese authorities from Irkut, and the type is being assessed by Portugal for possible acquisition in its firefighting role. The country has been having acute problems with forest fires during the last decade, an estimated 10% of forest having been lost.