Support builds for USAF to replace Hueys with Black Hawks

The US Air Force will decide in “next couple of weeks” whether to procure Sikorsky UH-60M Black Hawk helicopters to replace the Vietnam-era Bell UH-1N Hueys that protect America’s nuclear-tipped intercontinental ballistic missiles.

The balance of the 62-aircraft inventory supports other missions at different locations, including 21 UH-1Ns that transport military and government officials around the Washington capital region.

USAF acting assistant secretary for acquisition Darlene Costello told a Senate Armed Services subcommittee panel on 8 March that she will review alternative acquisition strategies in the next couple of weeks, and one option is to sole-source Black Hawks as an urgent need.

The balance of the total current 72-helicopter requirement, she says, will be competed at a later time. In 2010, the air force was seeking 91 to 104 Huey replacements.

“We’ve asked US Strategic Command and Global Strike Command to outline the criticality of their requirement to see which helicopters need to be replaced immediately as opposed to long-term,” says Costello. “Right now, we’re focused on the nuclear support mission.” 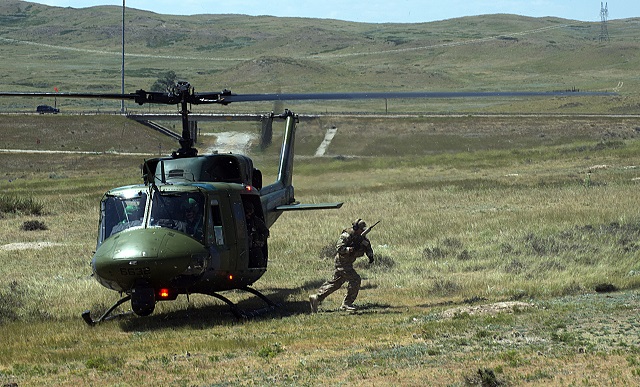 The air force says the ICBM protection role requires a helicopter that can carry nine fully equipped combat troops more than 225nm at 135kts. A Black Hawk would satisfy those specifications, but to sole-source the entire contract would exclude other bidders.

If the nine-person capacity requirement was tweaked, Airbus would propose the UH-72A Lakota and Bell Helicopter would push the UH-1Y. Finmeccanica’s AgustaWestland division would offer the 15-seat, twin-engine AW139, assembled in Philadelphia, Pennsylvania.

The now-43-year-old Huey was first rated as “not effective” for its missions in 2006, but subsequent replacement plans have been cancelled or pushed back because of other priorities.

Fifteen US lawmakers have requested that the air force sole-source Black Hawks, saying those orders could be placed in fiscal year 2017. Those lawmakers expressed their views in a 26 February letter to the heads of the House Armed Services Committee.

However, the air force must first prove if the sole-source contract is justified since there are several other American-made alternatives.

“If we do decide we wish to go sole-source it will be solely focused on the nuclear mission,” USAF military deputy for acquisition Lt Gen Arnold Bunch stressed at the hearing. “It will not be used to address the entire fleet.”

The Black Hawk discussion comes as the army awards Sikorsky $387 million for 35 more UH-60Ms. That purchase was announced by the Pentagon on 8 March.