Magazine reinvents itself in tumultuous 2000s

The first decade of the 21st century witnessed the arrival of a flurry of “disruptive” aircraft types, from the Airbus A380 and A350 XWB to the Bombardier CSeries and Boeing 787. It also saw the end of supersonic commercial flight with Concorde’s retirement in 2003.

The first decade of the 21st century witnessed the arrival of a flurry of “disruptive” aircraft types, from the Airbus A380 and A350 XWB to the Bombardier CSeries and Boeing 787. It also saw the end of supersonic commercial flight with Concorde’s retirement in 2003.

On the military front, after a decade of relative optimism and realignment following the end of the Cold War, the 9/11 attacks on New York and Washington DC ignited a “war on terror” that continues today and reshaped Western military procurement. Pan-national collaborations became the norm.

For the rebranded FlightGlobal it was an era of coming to terms with a very new publishing environment, as advertising and reading habits switched increasingly from print to online platforms. Social media – in the form of blogs and chatrooms and, later, Facebook and Twitter – became the planet’s favoured medium of communication. 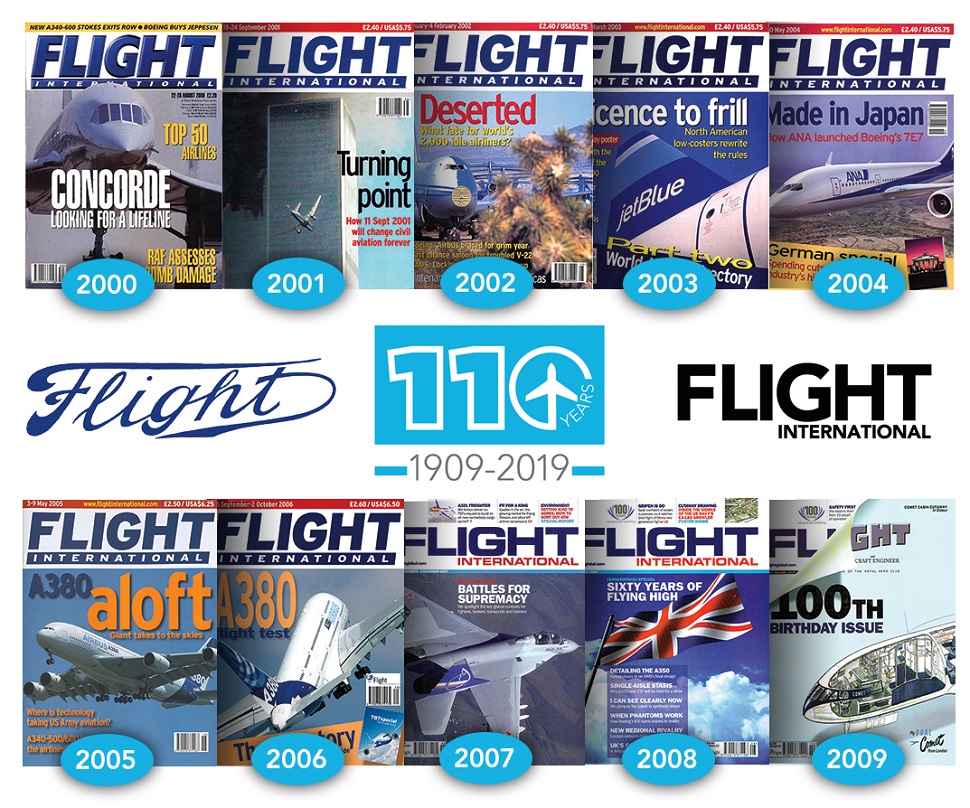 In 2001, Murdo Morrison took over as Flight International editor from the first woman to hold the post, Carol Reed, with Kieran Daly as group editor of a FlightGlobal portfolio that included Airline Business, Air Transport Intelligence, and Flight Daily News. Shortly after, the embryonic flightinternational.com relaunched as flightglobal.com, which rapidly became the biggest aviation news site with a regular audience of over a million.

Flight International covers reflected the momentous events of the decade – the image that captured that awful moment before the second hijacked airliner slammed into the World Trade Center and changed aviation forever; the last flight of Concorde, accompanied by the words “the final roar”; and the maiden sortie of the largest-ever commercial transport: “A380 aloft”.

With more people turning to the internet for breaking news rather than waiting for their weekly fix in print, Flight International had to reinvent itself, becoming a magazine indispensable for those who need to know not just what the stories are, but why they matter – complementing the free offering on flightglobal.com.

In 2009, Flight International celebrated its centenary with a special issue in which former editors and staffers recalled their time on the weekly, and current writers speculated about what the next 100 years would bring. Already there was talk of next-generation narrowbodies, electric aircraft, a new supersonic era, and everyday space tourism on the near horizon. The second century of Flight promised to be just as exciting a journey as the first.