ANALYSIS: Drone delivery of bread and bullets for the US Army

Seeking methods to keep their manned aircraft away from adversaries' long-range precision weapons, the US Army is looking at ways to rapidly resupply frontline platoons and squads with weapons, ammunition and other essential supplies using autonomous cargo drones.

After studying its logistical operations in Afghanistan over the past few years, the service believes it can use unmanned air vehicles (UAVs) to respond to the needs of small but vital units on the battlefield – effectively cutting out layers of military bureaucracy and logistical problems by allowing soldiers to call up supplies on demand.

To develop these ideas, the army has formed a joint effort with the US Marine Corps and is asking for input from aerospace manufacturers. The services recently held a three-day industry data exchange event starting on 26 March at Army Logistics University in Fort Lee, Virginia.

Calling their initiative the Joint Tactical Autonomous Aerial Resupply System (JTAARS), the services are looking for lightweight UAVs of less than 599kg (1,320lb), which can be easily carried on a small-sized vehicle, with minimal support equipment and maintenance required. The services want the UAV to be able to carry 136kg to 636kg of cargo.

The drone should have a single flight leg minimum range of 43nm (80km) and vertical take-off and landing (VTOL) capabilities. A propulsion type is not prescribed by the services, though manufacturers have been exploring electric, hybrid, fuel cell and petrol-powered engines.

"The unmanned VTOL air vehicle must be capable of automated functionality including launch, flight, navigation (including GPS-denied), cargo drop, landing and return to original launch location," says the army. "It requires autonomous ability to detect and avoid obstacles, evaluate and negotiate landing sites, and optimise its route to achieve resupply and retrograde objectives."

Delivery drones should be available for operational use by FY2024. 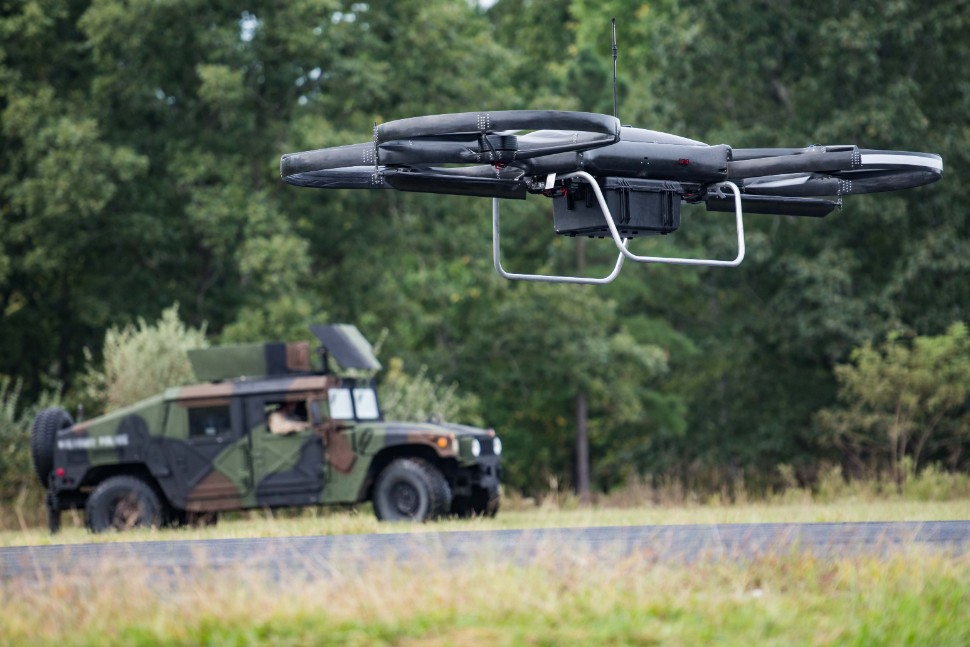 "A lot of times these aircraft could be reprioritised for something else," says Gottshall. "When they can carry tens of thousands of pounds, it might not be worth their while to execute their mission to carry a few hundred pounds."

As a result, some tactical commanders wouldn’t bother asking for resupply.

"Either they weren’t conducting the resupply and had to wait and do without," says Gottshall, "or they were using ground transportation, putting together a convoy, and all the security requirements and all the threat environment that entails."

Army aviation units were prompt when responding to emergency situations, such as when small units were under attack or in imminent danger, he says: "Those kinds of phone calls go up the chain of command pretty quickly. But what we are trying to avoid is getting in that situation to begin with."

Instead, with the help of UAVs, the army hopes it can bring its frontline troops exactly what they need when they need it. The on-demand nature of the system in some ways could look similar to the drone delivery efforts by commercial logistics entities such as Amazon, FedEx and DHL, says Gottshall.

Such a system could allow small units to stay constantly on the move, he explains. Against near-peer adversaries with precise and long-range weapons, such as China or Russia, resupply would be a key element in sustaining fast-tempo operations. "If you are static, you are probably not going to be around much longer," he says. "You certainly don’t have large [forward operating bases] and logistics bases in this [near-peer war] scenario. So what you want to do is mitigate the threat of all your supplies getting wiped out in one fell swoop. You want to decentralise as much as possible."

What's more, such just-in-time military logistics could help lighten the load of foot soldiers who are increasingly weighed down by batteries, electronic equipment, body armour, weapons, ammunition and food. Dismounted US ground troops carry 41-64kg – and sometimes even more – in combat, according to a study by the Center for a New American Security think tank. Unsurprisingly, the study noted that heavy loads reduce mobility, increase fatigue and reduce mission performance. 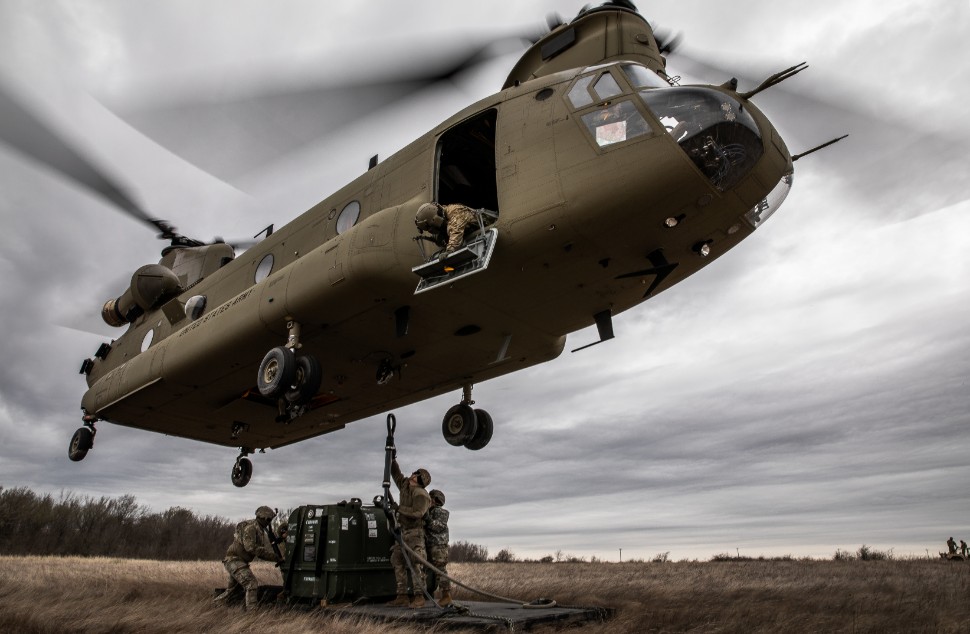 Ultimately, the army is looking for a system that will be easy to unpack, launch and fly. The service wants a system that can be lifted out of its travel container by two to four soldiers and be flying 10min later. What form that system will take is uncertain.

Bell and Boeing are developing cargo UAVs with commercial logistics in mind, though their products could have military applications. For its part, Bell said it had been following the JTAARS programme with interest and was planning to attend the industry data exchange event. Boeing declined to comment.

Bell's APT is a tail-sitter drone with four electric motor-driven propellers for vertical take-off and landing. To fly forward, the UAV rotates and flies on its wings, allowing it to fly faster and more efficiently than it could in its quadcopter mode. Boeing’s CAV is an octocopter with no wing surfaces.

The US Army Research Laboratory has also been experimenting using prototype cargo UAVs that it developed with UK-based Malloy Aeronautics, including exercises at Fort A.P. Hill, Virginia in 2017.

Bell says it is examining several different types of propulsion for JTAARS. "The propulsion system is definitely something that is going to require a significant amount of trade study analysis," says Todd Worden, manager of the company's advanced unmanned aircraft systems sales and strategy group. He says his firm is bullish on the future of battery-powered flight, pointing to the increasing power density of new batteries on the market.

"We are not doing anything that would preclude a battery being the solution," says Worden. "There is definitely a crossover point where the battery solution maybe isn't optimal, but we also have to look at when the solution is going to be employed and projecting to the future if there are going to be additional efficiencies in batteries."

The company is also looking at hybrid, fuel cell and petrol engine power.

Ultimately, given parallel commercial efforts to use autonomous cargo UAVs, the army may not pioneer its own technology, but borrow from advances in the civilian world. "A lot of times the army is not interested in a capability until the risk has been brought down in the commercial sector, so I am really hopeful that Amazon or FedEx – somebody in the world – will demonstrate the plausibility of this," says Gottshall. "I think that might spur some confidence within the DoD." 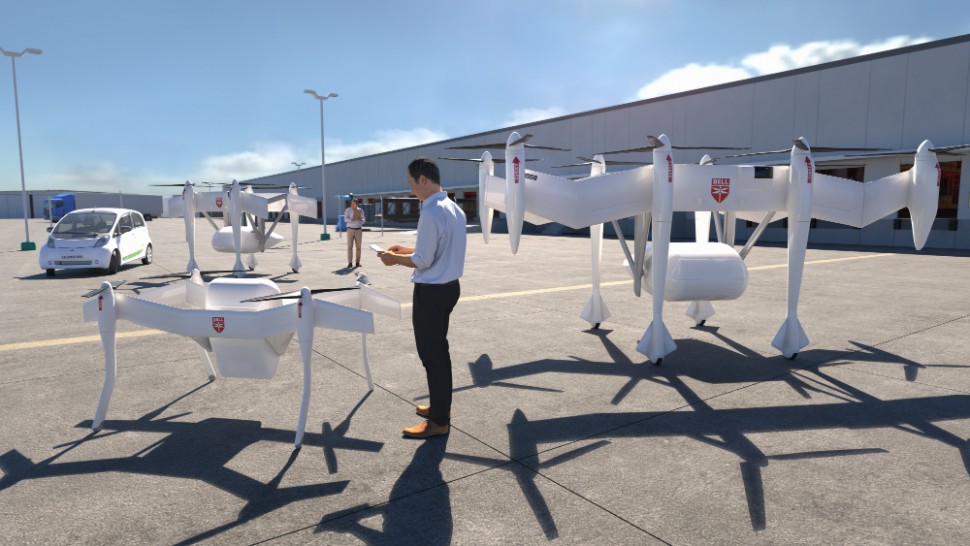