As the industry gathers for AIX 2019 in Hamburg, we examine how, following its acquisition by Safran, Zodiac Aerospace has pulled deliveries back on track and moved into the black with a restructuring aimed at restoring client confidence

Safran has always maintained that its acquisition of troubled interior equipment supplier Zodiac Aerospace – completed in February last year – made broad strategic sense, despite the managerial firefighting that would inevitably be involved.

With that in mind, the French group's senior leadership could probably be justified in feeling a sense of vindication when revealing last month that the cabin and seats division had generated a small operating profit in 2018.

During the 10 months following Zodiac's acquisition, the interior equipment manufacturer generated a total recurring operating income of €286 million ($321 million) on revenue of €3.8 billion. However, the result also indicated the extent of restructuring required for the seats and cabin equipment divisions. The two units generated the majority of sales – €2.01 billion – but contributed only €20 million in recurring operating profit. 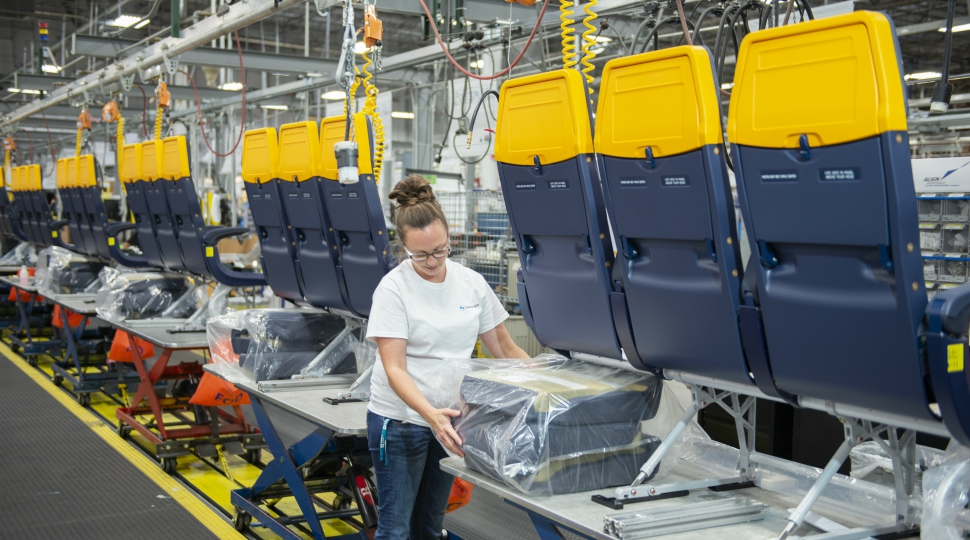 Seat production is a focus of Safran's restructuring programme

Despite the seats and cabin division's "very limited" operating profit, Petitcolin says the result shows Zodiac is now heading in the right direction. During the year prior to the acquisition, the company made an overall operating loss which exceeded €100 million. "We have moved a lot of things… changed people and started to bring [in] all the tools of Safran, which, in my opinion, made all the difference," he says.

Following the acquisition, Safran in November disclosed its creation of three separate sister companies – for aerosystems, cabin equipment and seats – and merged Zodiac headquarters into the group's Paris HQ. Engineering and purchasing functions were centralised as part of an effort to roll out Safran processes across Zodiac's operations.

Previously, many of Zodiac's activities were managed on a business unit or even site-by-site basis. "There was a lack of shared practices [and] standards, and now we want to… bring best practices and standards [to the operation]," says Safran seats chief executive Vincent Mascre.

However, Safran also moved aftermarket activities to the individual operating divisions; under Zodiac's structure these operations were handled centrally by a dedicated unit.

Overall, the restructuring of Zodiac's operations is on track, says Mascre. He admits, however, that "the engineering processes and supply-chain processes have been weaker than we forecast, which means that the recovery is probably deeper and more [of] a restructuring process".

In 2018, Safran spent €40 million on its Zodiac restructuring programme, 90% of which was directed at the seats and cabin operations. Seat deliveries declined 19% in 2018 after a spate of complaints from airlines and airframers over quality issues and delivery delays during previous years. For 2019, Safran is forecasting flat sales for the division.

Deliveries of cabin equipment increased 9% in 2018, however. This was mainly driven by production increases on the Airbus A220, A320 and Boeing 737 programmes.

"In the very short term, of course, in the seats business we are certainly seeing some challenges in the development of new… programmes," says Mascre. He acknowledges that rival manufacturers are taking advantage of Safran's position. The competition is "not at all" sleeping, he says.

However, he says the introduction of new processes and performance monitoring has led to a 30% fall in seat quality-related issues. Seat development and aftermarket support activities still require improvement, he says, adding: "We need to be quicker and more efficient." 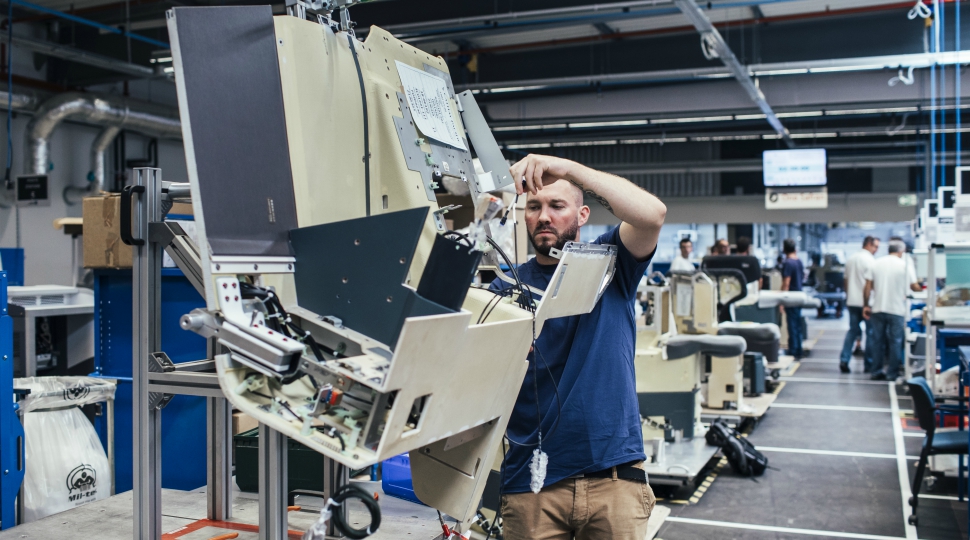 Petitcolin describes the problems as a result of Zodiac's "hectic" expansion as an independent company. The issues came to a head in 2015 when cabin equipment delivery delays hampered Airbus's effort to ramp up production of the A350.

Large cabin monuments, such as lavatories and crew rest compartments, need to be delivered – as complete units – to the airframer's final assembly line and placed inside the fuselage sections before the segments are joined, because the equipment does not fit through the aircraft's doors. As a consequence, delayed interior monuments had to be assembled inside the cabin, which created complications for the aircraft completion process. Airbus subsequently worked with Zodiac to resolve the issues.

In Petitcolin's view, remaining problems at the interior manufacturer are "all operational [and] under our responsibility, and all fixable". Success will depend on deeper factors, however. "Our top priority is to restore the confidence of our customers in order to win in the short term more orders," he says, noting that efforts must concentrate on improving quality and on-time delivery performance.

"If the topline [sales] comes back to where it was a couple of years ago, and if our market share in both seats and cabin comes back to the level they enjoyed before the crisis, I think we are in really good shape," he says.

Safran has raised to €250 million its target for cost savings to be achieved by 2023, up from a previous level of €200 million. The group has started consolidating facilities – notably in France and the USA – and plans to further reduce the footprint of the former Zodiac business, which included locations with multiple sites. 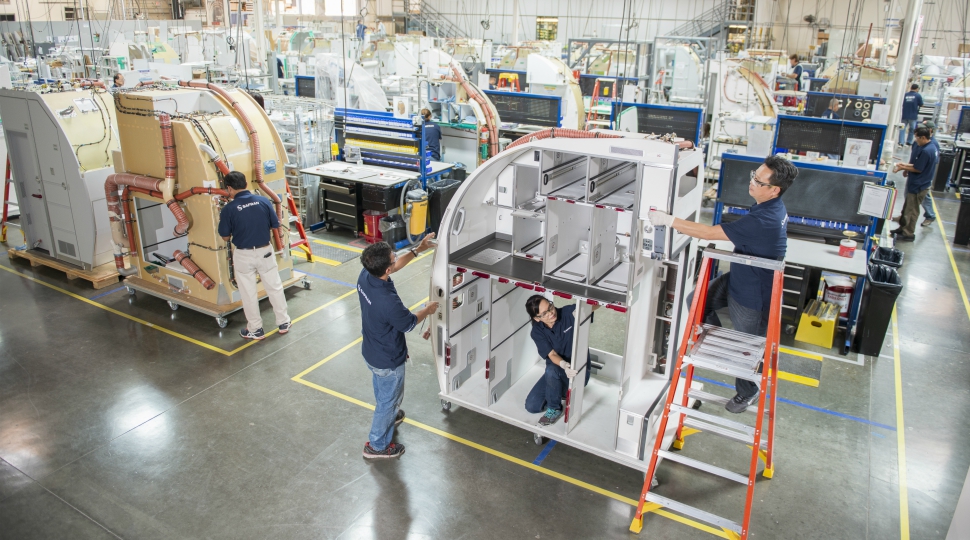 The plan includes some "big" changes – with some redundancies – but will mainly cover a range of "small" items and not involve extensive job losses, Petitcolin says. He foresees a sale of "a few" facilities that are not considered central to Safran's interior activities, and that the future business will end up with a rationalised footprint spanning 20-30 locations by 2023.

Additionally, the group is preparing to combine some activities from the aerosystems operation and other Safran units – including IFE equipment and water and air systems – into a new Passenger Solutions business. Following its launch in January, the project has been presented to employee representatives and is to be concluded later this year.

With Embraer, Safran has a joint venture named EZ Air, which supplies cabin equipment for the Brazilian airframer's E-Jet family. The company, based in Chihuahua, Mexico, was established by Zodiac and Embraer before Safran's takeover.

That co-operation suggests there might be scope for similar partnerships with Airbus or Boeing – especially as the US airframer has recently made efforts to reduce its dependency on external equipment suppliers through joint ventures, such as a seating business with automotive supplier Adient.

Petitcolin does not rule out the possibility of an interior partnership with Boeing. "We see what Boeing wants to do," he says. Noting that the US airframer is in the process of acquiring an 80% shareholding in Embraer's commercial aircraft business, he cautions: "It's too early to tell… if something could be done with [Boeing]."

However, he does say he is "not a fan" of an interiors tie-up with an airframer, because a substantial part of the sales in that sector is comprised of buyer-furnished equipment (BFE) and retrofit equipment. "The relationship we need to grow is with the airlines," he says.

"I have to supply the OEM with quality products on time at a competitive price. But for me the key is really the relationship with the airlines more than with the OEMs."

Petitcolin is confident that the acquisition of Zodiac and its combination with Safran's in-house capabilities will generate additional business opportunities.

Noting that supply of line-fit equipment can be arranged with relatively short lead-times according to the airframer's production plans, he says airline cabin interior orders "can come quite quickly" and might require changes. The key will be to provide that flexibility and, Petitcolin says, "to build trust again with our customers".

For more news from AIX 2019, visit our dedicated event page