As Rolls-Royce prepares its future Advance and UltraFan engine programmes, the UK manufacturer has made headway with several technology demonstrator tests that are central to the development effort.

The engine maker has for the first time fitted a Trent 1000 with composite fan blades in combination with a composite fan case. Ground testing of the demonstrator engine – the advanced low-pressure system (ALPS) – is set to begin at Rolls-Royce's Derby headquarters later this year, chief engineer of civil aerospace future programmes Phil Curnock said during a briefing ahead of the Singapore air show.

Previous assessments – including flights test on the manufacturer's Boeing 747 testbed in 2014 – were concentrated on the carbon-titanium (CTi) fan blades. The forthcoming test will be the first time that the CTi blades – which feature a titanium leading edge – and carbon casing will operate as an integrated system on a full-scale engine.

Curnock says the manufacturer completed in 2017 "quite a bit of testing" on the CTi fan blades, which was central to the ALPS effort. Indoor trials included tip-clearance studies, flutter mapping, and comparative performance trials of an engine that was subsequently fitted with both composite and conventional titanium fan blades.

Additionally, Rolls-Royce conducted outdoor rig tests, including cross-wind, noise and long-blade tip-rubbing trials. The fan blade's performance in natural icing conditions was also assessed during evaluations in Canada's Manitoba province. Curnock says those trials delivered "a lot of good data" and were "really key to understanding how a new material [composite] at the front of the engine behaves in icing".

Ground tests of the entire fan system will include bird-strike trials. This will not only assess the equipment's reaction to impacts, but Curnock says the manufacturer will also equip the demonstrator with damaged fan blades to determine the engine's performance following a bird-strike.

He says the combined fan blade and casing tests will be a "good step forward" to understanding the interaction between the components as titanium and composite casings will behave "slightly differently".

Also in Derby, the engine maker in November 2017 began ground tests of its Advance3 demonstrator engine, to assess a new and more efficient core for a future-generation turbofan. The Advance programme concentrates on the development of a new core with higher thermal efficiency, which is to become available for a potential new engine programme from 2020. UltraFan is a separate, complementary effort to introduce a geared fan for more propulsive efficiency from 2025.

Compared with existing Trent-series engines, Advance features a larger, 10-stage high-pressure (HP) compressor and a smaller intermediate-pressure (IP) compressor with four stages. They are being driven by a two-stage HP turbine and one-stage IP turbine, respectively. The demonstrator is fitted with a lean-burn combustor that has two separate fuel-flow systems to provide maximum thrust when high power is required, and a more efficient combustion process for the cruise phase. A fan system from the Trent XWB and a Trent 1000 low-pressure turbine have been installed to complete the engine.

Initial tests have covered bearing load measurements. "When you change the split between the compressors, it gives different forces on the bearings," says Curnock. He notes that the demonstrator engine has been operated to about 90% of core power and that the current "Phase 1" of testing has gone "extremely well".

Further tests will cover water ingestion, noise, X-ray examinations of the engine in operation, and core-zone and hot-end thermal surveys. Lean-burn combustors can have a tendency to rumble, Curnock acknowledges, but he says the demonstrator trials have not so far shown such effects.

Separately, Rolls-Royce is testing the lean-burn combustor on a modified Trent 1000 engine under an effort dubbed ALECSys – or advanced low-emission combustion system. While the Trent 1000 does not have the future core architecture, Curnock says the demonstrator facilitates tests such as fine-tuning fuel flow to optimise combustor performance.

He says indoor ground tests were concluded in January and that the engine will be transferred in February to Manitoba for cold-weather rig trials. This will cover start-ups and ice-ingestion evaluations. The ALECSys demonstrator will subsequently undergo noise testing on an outside rig and, "in the next couple of years", flight trials on the manufacturer's 747 testbed, says Curnock. 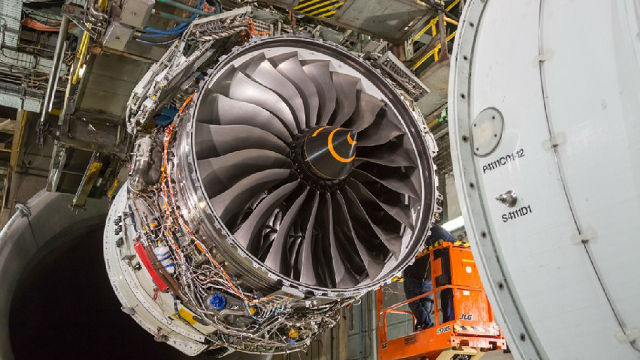 At its Dahlewitz site near Berlin, the manufacturer has started testing a third gearbox for the UltraFan programme. That will facilitate a relatively slow-turning fan, while the core's IP and HP spools can revolve at higher speeds, optimising the operating conditions of the individual sections. Furthermore, weight can be reduced as the engine will not require a LP turbine dedicated to driving the fan.

The test facility – located near the German capital, and purpose-built together with UltraFan partner Liebherr – was opened in 2016 and started operations that year with an attitude test rig. That assembly can simulate an aircraft's pitch and roll movements and is used, in particular, to assess oil-flow inside the gearbox.

Last year, Rolls-Royce opened a separate power rig at the site to assess loads inside the gearbox, which has been designed to accommodate turbofans with up to 100,000hp (74,600kW). Curnock says the current demonstrator gearbox can accommodate 70,000hp and reached that limit during tests in September.

He says testing is "well under way" and has lately concentrated on endurance and reliability assessments. Meanwhile, the first gearbox has been disassembled for evaluation, and Curnock says predictions about the component's performance have been confirmed. The analysis will feed into building a complete UltraFan demonstrator engine in "a few years' time", he adds.