Despite its declining combat fleet, the Indian air force still requires large numbers of trained pilots and technical personnel, especially given the acquisition of new fixed and rotary wing types.

Deliveries of the 75 PC-7 MkIIs signed for in May 2012 were completed in November 2015. An additional 38 PC-7 MkII units are to be procured and negotiations are underway between the government, the air force and Pilatus.

The Kiran intermediate jet trainer entered service in 1973. While the oldest examples are already being phased out, an estimated 140 of the type, including both the Mk1A and MkII, remain in service. The bulk of the Kiran aircraft are expected to be retired towards the end of 2019.

To meet its advanced training needs, New Delhi placed orders for 123 Hawk Mk132s in two batches. The first order was for 66 aircraft: 24 fly-aways and 42 manufactured under license by HAL. A follow-on order for 57 aircraft – 40 for the air force and 17 for the navy – was signed in 2010.

A third contract for 20 aircraft for the air force's Suryakiran aerobatic display team has yet to materialise, and the delay is likely to result in a gap in HAL’s Hawk production line at Bengaluru. 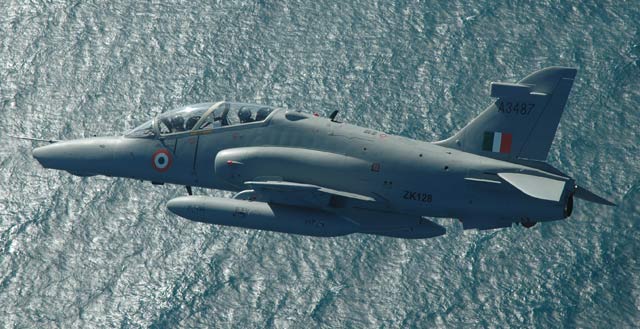 In 2016, it emerged that in addition to 20 display aircraft required, the procurement of additional advanced trainers was being considered by the Indian defence ministry. Up to 30 aircraft could be ordered, to be built under license by HAL.

HAL continues to propose an upgrade for the existing Hawk Mk132 fleet. “The 100th Hawk that has been built is now owned by HAL and we will install and test all the upgrades on this aircraft,” says HAL chairman Suvarna Raju.

At Aero India 2015, HAL showcased a proposed display and avionics upgrade for the Hawk fleet, to replace the existing cockpit displays and add a moving map display. There is also a plan to install an indigenously developed mission computer.

HAL is now looking towards a “Combat Hawk” or “Advanced Hawk”, in partnership with BAE Systems. In an email response to FlightGlobal, a BAE Systems spokesperson said: “The development of an Advanced Hawk demonstrator aircraft continues to progress. In terms of a new ‘slatted’ wing, the benefits it brings include the improved lift capacity and angle of attack capability as well as a greater turn rate. It will also improve runway performance.”

BAE Systems is also looking at the potential of a large area display for Indian Hawk aircraft. It is also evaluating capabilities in the UK RAF’s T2 Hawks for ones that would be useful for India.

A promising indigenously developed aircraft programme is emerging in the new HTT-40 basic trainer. Despite air force resistance to an additional basic trainer type, HAL commenced developmental work on the HTT-40 in 2013 with an investment of $30 million to fund preliminary and detailed design, and first flight took place in May 2016. Three HTT-40 prototypes aircraft and two static-test examples will be built.

“We have successfully demonstrated our capability to design and test-fly a basic trainer in a short period,” HAL's Raju told FlightGlobal. “The aircraft’s initial performance has exceeded our expectations and we hope to complete developmental work leading to certification, within the envisaged timeline.”

The first HTT-40 prototype (PT-1) has already been flown to an altitude of 15,000ft (service ceiling 25,000ft), attained a speed of 220kt (410km/h) and demonstrated a glide ratio of 11:1. A few modifications have already been instituted based on feedback from the test crew to further improve the handling qualities of the aircraft. A pressurised fuel system has also been tested successfully.

The second prototype, PT-2, is expected to make its first flight within the next few months and PT-3 will likely take to the air in early 2018. PT-3 is presently undergoing weight reduction efforts to optimise the design by around 200kg (440lb).

An aspect being given highest priority by the designers is the completion of stall/spin flight trials for the HTT-40. PT-1 will be fitted with an anti-spin parachute system (ASPS) before stall/spin flight trials are undertaken. It is estimated that approximately 100h of flight testing will be required before the stall and spin characteristics will be approved.

The HTT-40 programme has also earned the approval of defence minister Manohar Parrikar, who has made it clear that there will be no further import of basic trainers for the air force. With Stage II training now being handled by basic trainers, there has been an increase in the requirement of these airplanes from 181 to 210.

HAL already has a letter of intent for 70 trainers, the minimum number of airframes to be acquired for the project to be economically viable, and can now expect total orders for the type to exceed 120 units. Interestingly company officials say that the HTT-40 is being designed to have the required performance needed to perform Stage II training, if the air force should so desire.

If all goes smoothly and the HTT-40 enters service, the basic trainer is likely to receive export enquiries from countries friendly to India. FlightGlobal understands that the air force chiefs of Sri Lanka and Bangladesh have had a chance to see the prototype aircraft. An early introduction to the programme for potential export customers could allow HAL to plan for their requirements, sooner rather than later.

HAL’s other indigenous developmental programme for a trainer aircraft is the HJT-36 Sitara, though the programme has been in a state of terminal decline for quite some time. Development started in 1999 with a mandate for initial operational clearance by 2004. But 17 years later, final efforts are now underway to revive the programme after it was found during flight testing that the aircraft had serious aerodynamic difficulties, resulting in unsatisfactory “stall and spin characteristics”.

HAL has made a major push to resolve the issue. Stalling has been dealt with, but the aircraft’s poor spin qualities remain. NC Agarwal, a former director of design and development at HAL, says: “Something is wrong in the basic configuration of the aircraft. The aircraft requires a major fix as spin recovery is yet to be demonstrated.”

HAL is now looking for a consultant to assist with spin recovery, after a deal with BAE fell through. The programme could be shut down before the end of the year if no progress is made. No test flights have taken place for almost a year and even if all the issues related to the Sitara are fixed, it would still take 18-24 months to complete certification related tasks.

There would also be the costs related to restarting the idle line at HAL’s Kanpur facility, which produced an estimated six limited series production aircraft.