ANALYSIS: Why there was more to the HS Trident than just a lot of noise

The introduction of ICAO Annex 16 Chapter 2 noise legislation on 1 January 1986 forced operators of older first- and second-generation jets to hush kit their fleets. For British Airways, this was not a viable option for its fleet of Hawker Siddeley HS 121 Tridents – not that it needed an excuse to phase out these fuel-thirsty geriatric jets.

The Trident’s engine configuration – and somewhat marginal low-speed performance – meant that installing “dustbin-style” hush kits on its three Rolls-Royce Spey turbofans was impractical. By then BA was the sole operator in Europe – the only other Trident stalwart was CAAC in China, which did not adopt the noise legislation at that point.

So as the era of the new noise rules loomed large, the UK carrier ceased flying the tri-jet – dubbed the “Gripper” by pilots due to its reputation for cumbersome, ground-hugging take-offs – on the evening of 31 December 1985.

By that time, the airline’s Trident replacement programme was well into its stride. BA and predecessor BEA had operated more than 70 Trident 1C/1Es, 2Es and 3Bs and began replacing the type during the early 1980s with a mix of Boeing narrowbodies – 737-200s and 757-200s.

By December 1985, BA’s operational Trident fleet had dwindled to just six 3Bs while its 737s and 757s numbered 36 and 20 aircraft, respectively. On 31 December, BA operated the type’s final passenger flights from London Heathrow – a round trip to Copenhagen (in recognition of its first service, flown in March 1964), a return “Shuttle” flight to Manchester (marking another significant contribution that the Trident made to the BA network) and a charter to Amsterdam and back. 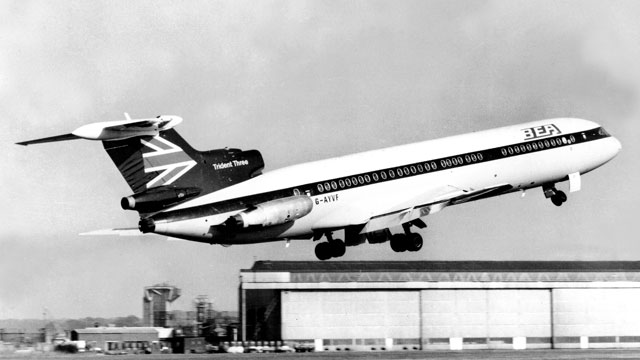 This writer was on board that final international passenger flight from Schiphol on New Year’s Eve, which air traffic control co-ordinated to approach Heathrow’s parallel runways simultaneously with the inbound Manchester service – a fitting way to bring the era of the British tri-jet to a close.

By the time of its retirement, the Trident was recognised mostly for the noise and smoke it generated on take-off. But crews who flew the de Havilland-designed jet during its heyday recall it as a true pilots' aircraft with “crisp” and “fighter-like” flying qualities. The aircraft’s arrival into service in 1964 also delivered a step-change in automation and set a benchmark for low-visibility operations which is still valid today.

After a maiden flight on 9 January 1962 from the old de Havilland plant at Hatfield, the Trident’s handling performance was refined by famous test pilot and Second World War legend John Cunningham.

“It was an awesome machine to fly,” recalls former BEA and British Airways Trident pilot Capt John Rankin. “It was the best handling airliner I ever flew with superb control, agility and rock solid stability, roll rates of 30° a second and smooth as silk right up to its Mach 0.96 maximum speed. The Boeings I've flown since felt like the designer drove a Cadillac. The Trident felt like a finely tuned sports car.”

Accompanying Cunningham in the six-man crew on board that first flight was a young test engineer called John Johnston, who later became assistant flight-test manager for the Trident. He recalls that while the Trident “was not a sparkling performer on the ground, the high Mach number behaviour was fantastic. We never did reach the limit in testing. 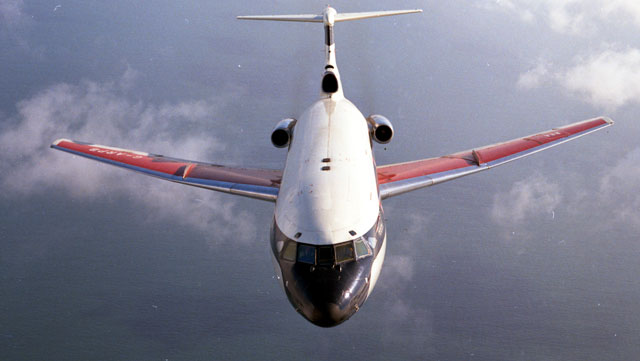 The three-engine configuration of the Trident inspired Boeing's 727, which went on to enjoy huge demand

“We got to Mach 0.975 during the Trident 1’s high-speed test, but this was not the maximum. There was no buffet.”

A key component of the Trident’s development was its “Autoland” system pioneered by Smiths Industries – now part of GE Aviation. This would ultimately allow operations in almost zero visibility. Central to this was the SEP.5 autopilot, which enabled an impressive amount of autoflight capability by 1960s standards.

Former Trident pilot Chris Wood believes that the aircraft was so advanced for its era that it was on a par even with today’s latest fly-by-wire Airbuses in terms of flightdeck systems. “We had an excellent autopilot and Category IIIB Autoland, good instrumentation and even a moving-map display.

“You could see two black marks on Heathrow’s 28L runway where all the Tridents had touched down in exactly the same place under Smiths autopilot control!”

On 10 June 1965, a BEA Trident 1C made the world’s first automated landing on a commercial service at Heathrow, arriving from Paris with 10 passengers. BEA, and then BA, was progressively cleared to operate automatic landings in increasingly reduced weather minima until the ultimate goal of Category IIIB, with a 12ft decision height/75m runway visual range approved in 1975.

By the 1970s, BA’s Trident fleet was regularly operating into Heathrow in thick fog when the rest of Europe’s airlines were grounded, waiting in the vain hope that the sun would break through. The airline made much of its Trident fleet’s capability, boasting that it was “number one in Europe” in its advertising campaigns. 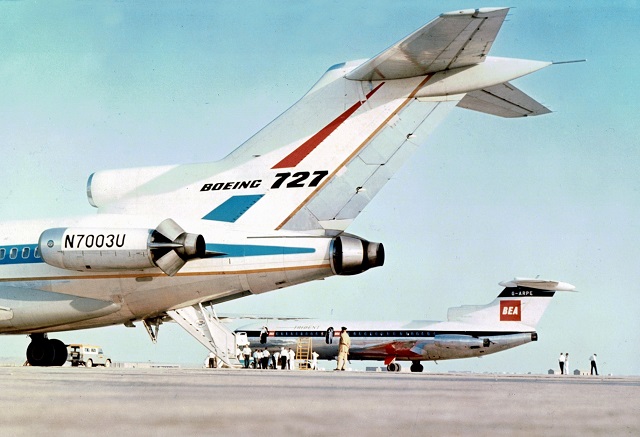 The Trident and its tri-jet rival, the 727, met for the first time in October 1963 on the tarmac in Karachi while on demonstration tours in the region

Along with noise and technical innovation, another aspect of the Trident’s legacy was its association with the then-new phenomenon of the “deep stall”, which can afflict aircraft with T-tail configurations. Such designs tend not to exhibit the classic nose-drop when entering the stall, but rather pitch up steeply and eventually enter a deep stall from which recovery can prove impossible.

The issue came to light during flight-testing, which had to be extended to investigate the phenomenon. “We tried all sorts of things – we did 2,000 stalls before we thought about installing a ‘stick-pusher’, and that was only after Vickers’ windtunnel tests showed that the high-tail configuration was prone to this deep-stall problem,” says former test engineer Johnston. “We would never have got it certificated without the stick-pusher.”

While the test programme established a certification path around the deep stall, this susceptibility would result in the loss of two BEA Tridents – one in June 1966 during flight-testing (killing six crew) and the other on take-off from Heathrow in which 118 people died.

That 1972 “Papa India” accident near the town of Staines remains a sensitive subject for ex-Trident pilots. The accident was blamed on the crew for inadvertently raising the droop high-lift device at a dangerously low speed, but the pilots feel that it was an accident waiting to happen. “We had two ‘dress-rehearsals’ before Papa India where somehow the aircraft was saved, but no modification was made to prevent the early retraction,” says a former BEA Trident pilot. “After Papa India, we got a speed lock on the lever to prevent early retraction.” 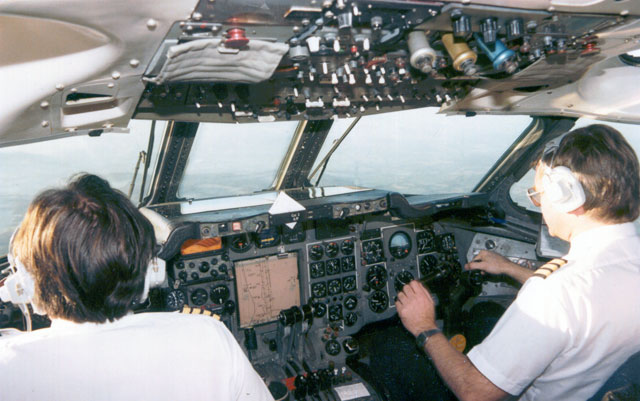 Busy flightdeck was bristling with technology

In all, Hawker Siddeley built just 117 Tridents and few aviation historians deny that the groundwork de Havilland laid with its 121st design should have been the springboard for huge global success. In its original guise the DH121, as it was known at the time, was hugely influential on the design of Boeing’s first attempt at a short-haul jet – the similar-looking 727. But while de Havilland caved in to pressure from launch customer BEA amid a drop in passenger growth forecasts and shrunk its design, Boeing stuck to its guns and built the 727 as the aircraft that the DH121 should have been, and sold a staggering 1,831 of them.

The other major Trident operator was CAAC of China, which took delivery of 35 new Tridents. The last and 116th Trident delivery took place in September 1978, to CAAC. Chinese Trident operations continued into the 1990s, when the sun finally set on the tri-jet.

The Trident era may have ended in Europe three decades ago this new year, but the type is still much in evidence at museums around the UK. Duxford, Manchester, Wroughton and Sunderland’s North East Aircraft museum all have complete examples preserved. The Trident’s complex but fascinating cockpit can be experienced first-hand through a visit to Farnborough’s FAST museum, which has a complete nose section among its exhibits.

And if it’s full-on 1960s BEA nostalgia you are after, then pay a visit to Trident enthusiast Kevin Bowen’s Heathrow Trident Collection on the outskirts of the Gripper’s old stomping ground (visits can be arranged by emailing g-awzk@msn.com). 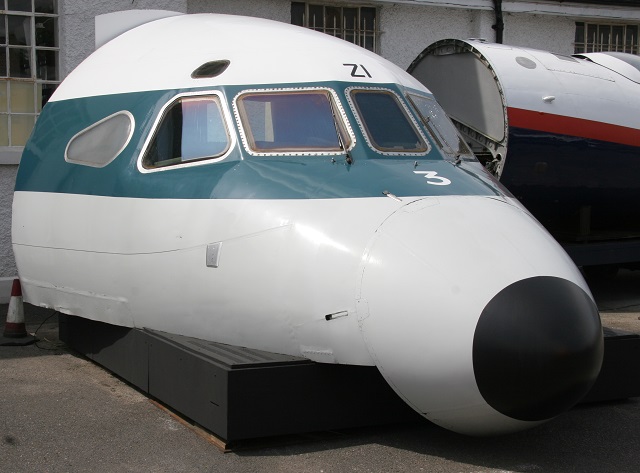