The Royal Australian Air Force (RAAF) has taken the latest step towards introducing its new fleet of Pilatus PC-21 basic trainers, with its first six of the Swiss-built turboprops having been fielded at its East Sale air base in Victoria. 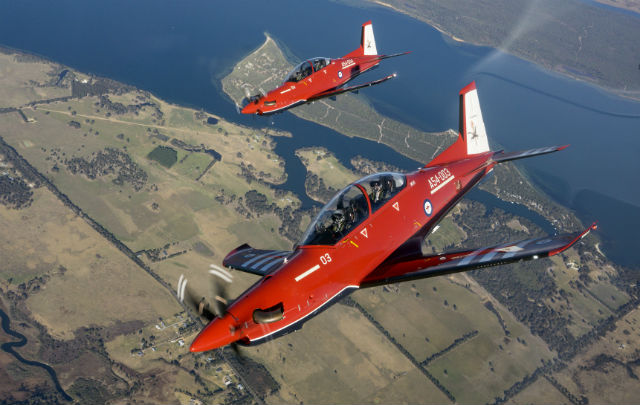 A total of 49 PC-21s will eventually be handed over to the RAAF, with Flight Fleets Analyzer showing it as having accepted 10 of these to date. The first student pilots are scheduled to begin flying the type – which will replace a 30-year-old fleet of PC-9/As – in early 2019.

"The new pilot training system is a significant leap forward, and will train more of our people faster, and to a higher standard," says defence minister Marise Payne. Up to 165 trainee pilots will use the updated facilities at East Sale each year, the Department of Defence notes.

A new basic training school will be equipped with 42 of the aircraft, along with seven simulators and related training equipment, under the DoD's Project Air 5428 acquisition. The facilities at East Sale will be completed by September 2018, with the programme involving prime contractor Lockheed Martin Australia, Hawker Pacific and Pilatus.

Four PC-21s will be assigned to the RAAF's 4 Sqn to support operational training needs, with the other three of the service's examples to be operated from its Pearce air base in Western Australia for research and development.