Bombardier has delivered the third and final Challenger 650 to Swiss rescue and emergency medical services provider Rega, from a 2015 order for the large-cabin business jet.

The aircraft, registration HB-JWC (pictured below) was handed over on 17 December, joining its stablemates, HB-JWA and HB-JWB, which entered service with Rega in May and August respectively. 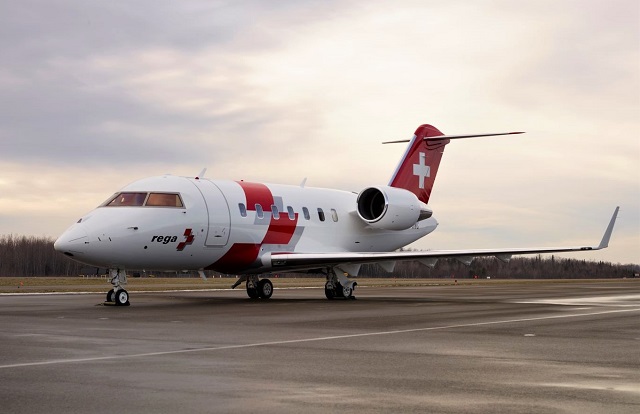 The trio replace the company’s Challengers 604s – the third iteration of the 600-series, which Rega has been operating since 1982. Its line-up also includes 17 rotorcraft, including Airbus Helicopters H145s and Leonardo A109s.

The aircraft were completed in Peterboro, Ontario by engineering firm Flying Colours, and are each equipped with two state-of-the-art intensive care units, including two patient beds.

Bombardier Business Aircraft president David Coleal says the aircraft has been handed over with the “utmost confidence and pride”.

“Confidence because we know these aircraft have the reliability that is so important when lives are on the line, and pride to see the Challenger platform configured into the world’s most advanced air ambulance,” he adds.