Members-only VIP airline Surf Air is preparing to launch European services at the end of November, and is confident it can emulate the success of its burgeoning US-based programme.

“We have been keeping under the radar for the last six months to assess the market,” says Surf Air Europe chief executive Simon Talling-Smith. “Not surprisingly, it’s proving a big hit – particularly among those travellers looking for an alternative to commercial airlines. We have already signed up 150 members.”

Members pay a monthly subscription fee – starting at £1,950 ($2,400) – which entitles them to unlimited flights on its scheduled services. 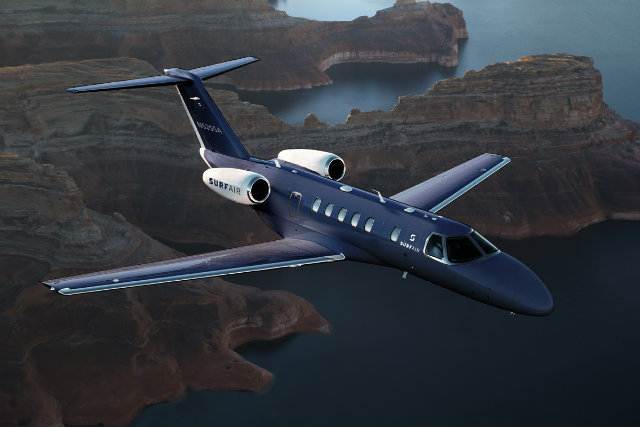 Bookings can be made via the Surf Air app up to 15min before departure, and all flights connect to private aviation airports or fixed-base operations (FBOs) at each destination.

London Luton to Zurich will be the inaugural service, with flights departing and arriving at the Signature and ExecuJet FBOs, respectively. Within three months, Surf Air will add Geneva and Cannes to the network, with TAG Aviation the service provider at the former airport. Other European destinations are planned including Paris, Dublin, Ibiza and Amsterdam.

Surf Air Europe is currently in discussion with Cessna and Embraer with a view to acquiring up to 50 Citation CJ4 or Phenom 300 light business jets, to be delivered over a five-year period. “We hope to make a decision by early next year,” says Talling-Smith. He admits he is driving a hard bargain with the two airframers, which would welcome such a lucrative contract in the current economic climate.

“We are looking for a package,” says Talling-Smith. “Delivery schedule, price and maintenance are all part of the deal.”

The company is also looking to add Pilatus PC-12NG single-engined turboprops next year. “We will take these from Surf Air US’s significant orderbook,” he says. The Santa Monica, California-based venture operates a fleet of 12 PC-12NGs and has an order for 53 units.

The Surf Air Europe fleet will be G-registered in the UK and operated by TAG on its aircraft operator’s certificate.

Ahead of the new aircraft arrivals, Surf Air will charter business aircraft from a number of European operators. “We have a purchased a significant number of hours on seven- and eight-seat models, including the CJ4 and Phenom 300,” says Talling-Smith, who believes the programme will mirror the US operation’s success.

He says: “Since its launch [in 2013], the operation has added 3,000 members and now makes around 90 flights a day [to 12 cities in California]. We will be flying multiples of that in years to come. Europe has huge potential.”